Gambling pays out a $38 billion bonus to tax collectors

Who would have bet that the volatile Yasiel Puig would be on the bench today when his Los Angeles Dodgers try to even up the National League Division Series against the St. Louis Cardinals?

Some folks did. Literally. Popularity of betting, sports and otherwise: While baseball generally isn't thought of as a prime sport for bettors, some folks still put money on the games, especially during the Major League Baseball playoffs.

In fact, there's always something for somebody to bet on in every sport. I must admit I get a kick out of the many prop bets that are placed on Super Bowls every year.

There's also a whole lot of non-sports betting going on, too.

And tax collectors at all government levels are thankful for all of us -- c'mon, you've bought a lottery ticket or two; those are my last (losing) PowerBall numbers there to the right -- who want to now and then take a risk with some of our money.

The gambling industry nationwide paid $38 billion in federal, state and local taxes in 2013, according to a report from the American Gaming Association.

Sharing the tax wealth among treasuries: Of that $38 billion in total tax revenue, $10 billion came directly from gambling operations, according to the report. Worker income and Social Security taxes, as well as casino property taxes, and more, accounted for the rest. 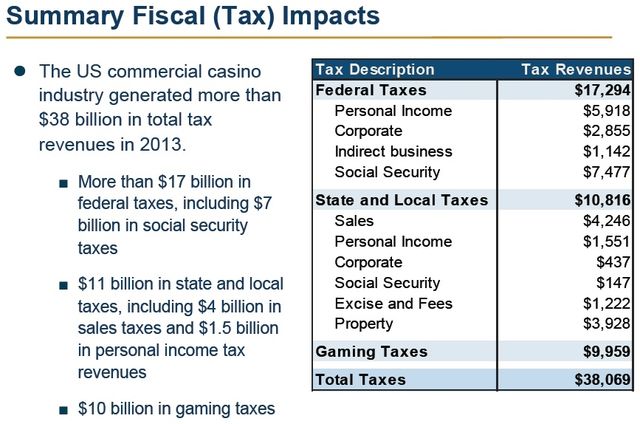 "The research reveals a vast industry that supports local communities across the country through business linkages and employment generation," said Adam Sacks, director at Oxford Economics, the firm that conducted the study on the economic impact the gaming industry as a whole has on the U.S. economy.

"Given the relatively high levels of taxes on the casino industry," added Sacks, "it supports a wide range of government services as well."

New players on the bet-taking side: For the first time, tribal casinos, casino-game makers and some online gambling were included in the mix along with the more traditional gambling options.

In addition to the taxes generated in connection with gambling, the study found that the U.S. gaming industry provides:

"We've known for a long time that our industry's contributions have gone underestimated, but these numbers are bigger than even we anticipated," said Geoff Freeman, president and CEO of the American Gaming Association. "Our future success depends on strong partnerships with policymakers that allow us to innovate, reinvent, and create more jobs."

You can bet that this report is going to be circulated in statehouses and on Capitol Hill, where there is a small but committed contingent of lawmakers who want to loosen restrictions on online gambling.

Taxes will and can haunt anyone for the rest of their live.

Set your limit to a small selection of games to bet on. The maximum number of games you pick the minimum chances of stepping out as a winner. Make sure that you know the reason why you are choosing that specific sport for betting.Don’t trust on your intuitions and emotions as they are the best ways to empty your bankroll.