Are you willing to pay more to cover Airbnb taxes?

Airbnb is wildly popular with almost everyone.

Among the few detractors are some neighbors of the short-term rental properties and the Empire State's top lawyer. 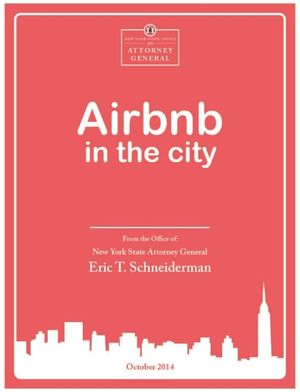 Eric T. Schneiderman, Attorney General of New York, made his concerns known in a report, Airbnb in the City, released Thursday, Oct. 16.

It details the AG's office investigation into Airbnb and similar web-based rental operators who, according to the report, "run large-scale enterprises in violation of fire safety, zoning, tax, and other applicable laws."

Most of the data, and hence the report's name, came from four years of data Airbnb provided to the AG after a court fight.

Missing millions in taxes: In the tax area alone, the report asserts that the Big Apple is likely owed millions in unpaid hotel taxes from Airbnb private short-term rentals.

How many millions? The AG staff estimated unpaid tax liability of almost $33.5 million from Airbnb rentals from 2010 through the first five months of 2014.

And that total doesn't even count possible added fines and penalties.

Supporters of the home sharing system are likely to dismiss the report's findings. They tout Airbnb and similar firms in the new sharing economy as pioneers who are busting greedy monopolies that no longer care about their customers.

That finding is likely to be highlighted by critics of the system, who say "sharing economy" is simply a euphemism for avoiding regulation and taxes.

Do you use Airbnb and similar companies to find lodging when you travel? Would having to pay more to cover taxes affect your decision?