When pets can pay off on your tax returns

Our beloved cat Zeke was part of our family for 19 years. He's been gone for 15 now and we still think about him every day. Zeke chilling out in a box at our Maryland condo back in 1984.

Our human family and friends are stunned we never adopted another cat. When I've broached the subject of a new kitty over the years, the hubby's reaction has remained consistent and firm: "Do people get another kid when they lose one?"

Sometimes, but that's a topic and blog post for another time. Today's focus is on our collective devotion to our domestic animals.

Pervasive, pricey pets: The hubby and I are not alone in feeling such a connection to a pet. Dogs reside in almost 37 percent of U.S. homes. Cats are in more than 30 percent of our residences.

In raw numbers, almost 70 million dogs and more than 36 million cats are counted as family members, according to the latest data from the American Veterinary Medical Association.

As we do with all our loved ones, we spend a lot on those furry family members. The American Pet Products Association says $55.7 million was spent on items for our animals in 2013. The trade group estimates pet owners will spend even more, $58.5 million, this year.

Pet bequests: And for some, the expenditures don't end when we shuffle off this mortal coil. Hotel heiress Leona Helmsley got a lot of attention, good and bad, when she left $12 million of her estate to take care of her Maltese dog Trouble.

"They hear the amount of money left to the trust for the pet, but the money wasn't only for the pet," notes Gerry W. Beyer, Governor Preston E. Smith Regents Professor of Law at Texas Tech University School of Law and wills, trusts and estates blogger. "All the money wasn't left for the pet. It was for the care of the pet."

And bequests to care for pets have a long history.

In a recent paper on "Estate Planning for Non-Human Family Members," Beyer cites the many modern-day celebrities who did make or have made arrangements for their pets in their wills. In addition to Helmsley, they include singer Dusty Springfield, tobacco heiress Doris Duke, actress Natalie Schafer (Lovey Howell on Gilligan's Island), actress Betty White and talk show queen Oprah Winfrey.

Centuries old tradition: The foundation for such last wishes regarding pet care can be found several centuries ago across the pond. In the book "Cats' Most Wanted: The Top 10 Books of Mysterious Mousers, Talented Tabbies and Feline Oddities," Alexandra Powe Alllred recounts two historic cat bequests:

"John, second Duke of Montagu, loved his cats so much that he decided he would leave part of his estate to his animals. When he died in 1749, his cats continued to live in luxury since he had no remaining relatives left to dispute the will.

But 17th century French harpist Mademoiselle Dupuy's cat was not so lucky. Dupuy believed she owed her skill as a musician to her cat, who sat beside her while she performed, expressing -- she believed -- pleasure or annoyance, depending on how she played. Consequently, she left him both a town house and a country house with sufficient income to keep them up properly. Her relatives, however, succeeded in wrestling (sic) this bequest away from the unfortunate feline, who probably was not even allowed to be present in court."

Dupuy's bequest even made it into fine art. An etching, Mlle. Dupuy thanks her cat handsomely by Anne Claude de Tubières-Grimoard de Pestels de Lévis, comte de Caylus, shows the ailing musician in bed, her cat in her arms, as she dictates her will to the family lawyer as her physician looks on.

Obviously, the image below is not the Dupuy etching. But these similarly musical felines seemed fitting. 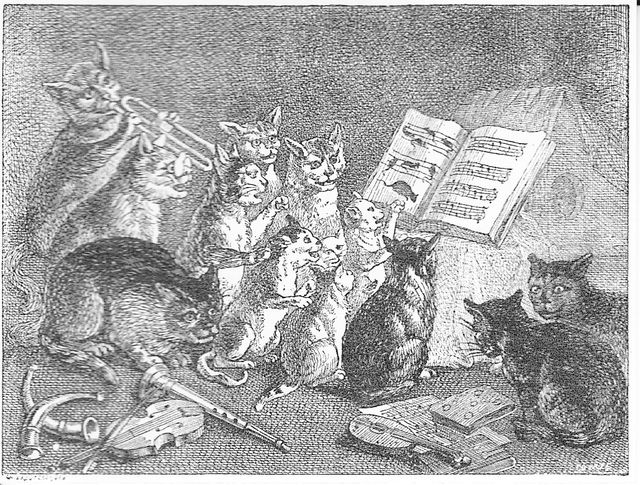 Folks in the Austin area can see the Dupuy/Tubières-Grimoard image as part of the Blanton Museum's exhibit "In the Company of Cats and Dogs," which runs through Sept. 21.

Pet costs and taxes: Such bequests, however, are not tax-free. (You knew I'd eventually get there, didn't you?)

As Beyer notes in my Bankrate story, 6 tax-related tax write-offs, depending on how the pet trusts are set up, taxes generally must be paid by the pet owner in the case of a living trust; the trust beneficiary, who typically is the pet's caregiver; or the trust itself.

There are, however, some other instances where you do get a tax break in connection with your pet.

This collection of tax-related pet expenditures is this week's Weekly Tax Tip. Even if they don't apply to you (yet), they make for a pretty fun read, if I say so myself.

And if your spouse is more agreeable about pet ownership than mine is, consider adding a new furry kid to your family. Even without tax breaks, it's usually a good move, for both you and the animal.

Thanks for this information and thanks for what you have done. Thanks once more.