Are you ready for some football!?

Nothing personal soccer fans, it was a great World Cup and all. But this, starting with tonight's 2014 NFL season kickoff game between the Green Bay Packers and defending Super Bowl champion Seattle Seahawks, is what most of us U.S. sports fans live for.

So do the rookie players who are looking to make their marks with their NFL teams.

And so does the Internal Revenue Service.

In addition to the hundreds of well-paid returning veterans, the federal tax collector also is jazzed about the professional football league's new blood. More guys are suddenly in the highest tax bracket.

When NFL training camps cranked up this summer, Mike Slack, a tax researcher with the Tax Institute at H&R Block, took a look at some of the new players' salaries and their possible federal income tax bills. 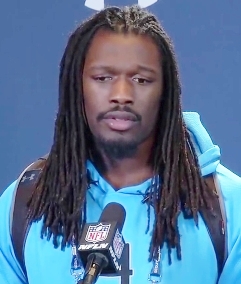 The good tax news for Clowney is that half of his regular season games will be in income-tax-free Texas.

That means he won't owe state taxes on the income on those eight home-field matches at NRG Stadium.

Johnny Manziel (below) wasn't selected until the 22nd pick of the draft. But the Cleveland Browns are paying Johnny Football enough so that, per Slack's numbers, he'll owe Uncle Sam an almost $1 million tax bill. 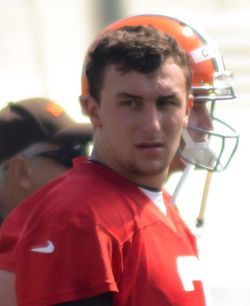 Will Manziel try to retain his Texas residency or make Ohio his full-time home? From a tax standpoint, he could save some money if the Lone Star State is his official tax home.

But now that his buddy Lebron James is back in a Cavaliers uniform, Manziel might decide to spend more time in the Buckeye State.

Finally, Slack examined the tax outlook for Michael Sam (below), now a member of my Dallas Cowboys.

Sam, the University of Missouri All-American and first publicly gay player ever drafted by an NFL team, was selected as pick #249 by the St. Louis Rams. That could go up, however, if Sam is promoted from the practice squad to the 'Boys' active roster, a distinct possibility since the team is in dire need of all the defensive help it can get.

If that happens and he's successful, Sam could end up owing the IRS more, but he will be in the same favorable state tax situation as Clowney.

Check out Slack's post at Block's tax blog for his full tax breakdown on these three new NFL players.

Jock taxes, too: And despite where they call home or what team they play for, all of these guys and their NFL colleagues (including coaches and trainers) will face jock taxes when they play in some states and cities.

Of course, neither the players nor us fans will be worrying about taxes when tonight's and the rest of this season's games start. So I wanted to get this tax talk out of the way now so we can concentrate on the important stuff.

In case you haven't yet checked out the NFL teams' prospects for this season, ESPN has its annual roundup and predictions.

The sports site has Dallas coming in second in the NFC East, but that's more a reflection on how awful the division is than the Cowboys' abilities. Hey, I love my team and believe that anything can happen on any given Sunday, but I'm a realist.

Here's hoping your team has a great season, unless your team is the Eagles, Giants or that Washington, D.C., squad.