Labor Day's first observance is generally thought to be Sept. 5, 1882. On that day, around 10,000 workers assembled in New York City for a parade.

Since everyone loves a parade, the Big Apple celebration inspired similar events across the country. By 1894, more than half the states were observing a "working men's holiday" on various days. Later that year, Congress passed legislation and President Grover Cleveland signed into law the country's official designation of Labor Day as the first Monday in September each year.

The OES examines employment and wage estimates for more than 800 occupations. May 2013 data were released on April 1, 2014, and showed that the largest employment sector was retail salespersons and cashiers. 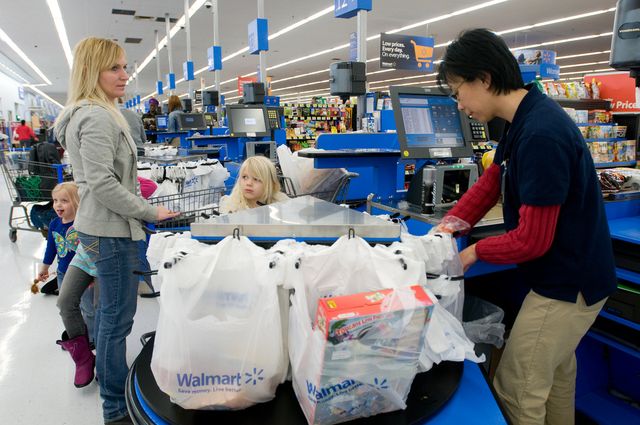 A family checking out at the Gladstone, Missouri, Walmart store. Photo courtesy Walmart Corporation via Flickr.

Those two occupations combined made up nearly 6 percent of total U.S. employment last year, with employment levels of 4.5 million and 3.3 million, respectively.

Job outlook picking up, but not pay: Unfortunately, most of the jobs in the most widely held sectors were relatively low paying.

Annual mean wages for the rest of the 10 largest occupations ranged from $18,880 for combined food preparation and serving workers to $34,000 for most secretaries and administrative assistants.

At least more folks are finding work, even if they wish it paid better.

Almost 146.4 million people had jobs in July, according to the latest employment data from the Labor Department.

The BLS' Aug. 1 jobs report showed that nonfarm payroll employment increased by 209,000 in July. That left the unemployment rate essentially unchanged at 6.2 percent.

Pay means payroll taxes: If you don't make a lot of money, you might be able to escape income taxes. But regardless of how little you make, you'll still face payroll taxes.

This means each employee has 6.2 percent of his or her pay withheld to cover Social Security taxes. The worker's employer matches that 6.2 percent amount. That's a combined 12.4 percent of your pay that goes to the fund that will eventually pay you retirement benefits.

All these 6.2 percent rates -- the latest unemployment level and the employer and employee Social Security payroll taxes -- earn that percentage this week's By the Numbers honor.

The Social Security payroll taxes come out of your pay until you hit a threshold amount that's adjusted each year for inflation. For 2014, that level is $117,000.

If you're lucky enough or do your job so well that you earn more than $117,000 then you don't have to worry about the Social Security tax on your higher earnings. Once you and your company have made payroll tax payments for your $117,000 in pay, the earnings above that amount are payroll tax free.

And self-employed folks take note. You must pay both the employer and employee portions of the Social Security tax. Be sure to take that into account when you're calculating your estimated tax payments.

You do, however, get to claim that employer portion as an above-the-line deduction when your file your 1040.

The Medicare tax is, like the Social Security tax, paid by the employee and the employer. But there is no wage base limit for the Medicare tax. No matter how much you make, you and your boss each continue to continue pay 1.45 percent of your pay each check period, for a total of 2.9 percent, to cover Medicare health insurance benefits.

These combined employer and employee FICA taxes total 15.3 percent of your pay each year.

And if you make a whole lot of money, you'll also face the additional Medicare tax. This is an added 0.9 percent collected when your wages as a single person exceed $200,000.

For tax filing status purposes, that $200,000 threshold covers an unmarried filer, a head of household taxpayer and a qualifying widow or widower with a dependent child. The Medicare payroll surtax kicks in at $250,000 for a married couple filing jointly or half that for each spouse when they file separate returns.

This added Medicare tax comes solely from the employee. There is no employer match for the 0.9 percent.

Chow time! OK, I promised fun in the headline. Some of us consider taxes fun, but if that's not you, then let's talk Labor Day diversions. 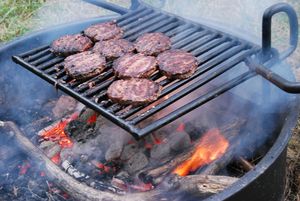 For the hubby and me, this holiday weekend means catching some baseball and, of course, eating.

The hubby and I are not alone. Although school has already started in many places, Labor Day officially marks the last weekend of the summer. Lots of people take advantage of this final chance to get out and enjoy a picnic or a barbecue with family and friends.

We -- and by we, I mean the hubby -- will put some burgers on the grill later today. Dan Rodricks of the Baltimore Sun, however, thinks this is lame. Labor Day, he says, needs an official meal.

Since hamburgers and hot dogs are virtually the same meal Americans have on Memorial Day and countless times over the summer, they don't make Rodricks' meal cut. "Such common fare does not provide sufficient commemoration," he says.

Rodricks' Labor Day meal suggestion is a peppers-and-eggs sandwich. While some may see sandwiches as too lightweight for a long holiday weekend, Rodricks says the handheld meal has its roots in the era of blue-collar workers who carried their lunches to the factory, field or mine in bag, box or bucket.

Check out his column for his defense of his sandwich, as well as the recipe.

What do you think? A sandwich to wind down summer? What do you and your family do -- and eat -- over this three-day weekend?

We're sticking with hours of baseball and grilled burgers, topped with some roasted Hatch chili peppers and Swiss cheese.