Thirty-seven years ago the musical world was in shocked mourning. Just a day earlier, Aug. 16, 1977, Elvis Aaron Presley had died.

Many people can still tell you where they were on that Tuesday afternoon more than three decades ago when they got the news that the King was dead.

I can't. I was probably in a class at Texas Tech University. But I wasn't then and am not now a big Elvis fan (despite what I've discovered is a surprising number of Elvis-related blog posts), so it doesn't stick in my memory.

Still, I recognize his place in the musical pantheon. And even all these years after his passing, Presley continues to be a player.

Still making money: If you don't fast-forward through commercials, you can hear a young Elvis singing Bossa Nova Baby in a Heineken beer ad. He recorded the song for the 1963 movie "Fun in Acapulco."

His estate's earnings of $55 million were second in Forbes magazine's 2013 ranking of the top earning dead celebrities. Elvis was runner up last year to pop idol Michael Jackson and comfortably ahead of Peanuts cartoonist Charles Schulz.

"The King of Rock n' Roll may have taken a back seat to the King of Pop," wrote Forbes last fall, "but he's still earning steadily thanks to his eternally popular image and his famous home, Graceland." 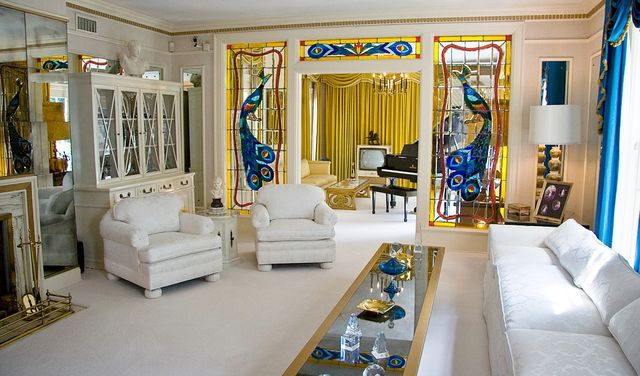 The growing of Graceland: Ah, yes, Graceland. The extravagantly, some would say ostentatiously, decorated mansion where Elvis suffered his fatal heart attack and its grounds where he is buried remain a major tourist attraction.

Elvis Presley Enterprises Inc., the company that manages the property and the Elvis brand, wants to make Graceland an even bigger draw. And it wants Memphis and other Tennessee taxpayers to help.

The company is seeking is seeking an estimated $40 million in future tax money for its grander vision of Elvis' estate. That $40 million request, and its connection to Elvis, earn this week's By the Numbers honor.

More than half a million visitors a year arrive at Graceland gates. With a tourist development zone in place, the money those Elvis fans spend there would directly benefit the King's estate.

The new zone money also would help fund a proposed 450-room, $75 million hotel and conference center. The planned lodging and meeting center would replace the Heartbreak Hotel, which would be demolished after the new project is completed.

With the tourist zone in place, part of sales taxes on Elvis memorabilia sold at Graceland would go toward the hotel construction loan. Without the zone designation, the taxes would go instead to Tennessee and city treasuries.

In addition to the tourist zone, Presley Enterprises wants a 5 percent tourist surcharge on visitors.

Finally, the company is seeking a property tax break for the new development, under which it would split incremental tax increases 50/50 with the city.

Most of Memphis on board: The Memphis city council approved the rezoning on Aug. 5, citing the potential for new jobs and investment at one of Tennessee's largest tourist destinations.

Graceland executives estimate that the hotel expansion would generate 150 to 180 jobs that would pay an average of around $17,000 a year. The company says it also plans to create 200,000-300,000 square feet of new attractions on the west side of the Graceland property.

State approval is required for the tourist development zone change to take effect. Memphis city council members are expected to take up the other tax requests at future meetings.

But not all of Tennessee agrees: While Elvis remains loved in his hometown, the project is still drawing some push-back.

Justin Owen, president and CEO of the Nashville-based Beacon Center of Tennessee, a nonprofit free-market think tank, told Tax Analysts that while an expansion of Graceland could be great, taxpayers or the public shouldn't foot most of the bill.

Worthwhile projects, said Owen, can find private investors who want to participate in the expectation of turning a profit. But government involvement, he said, likely would crowd out those investors.

Michael Williams, head of the Memphis Police Association attended the tourist zone hearing and afterward told the Memphis Commercial Appeal that while he favored the Graceland expansion, he is concerned about the city's financial future. Memphis unions, according to the newspaper, blame the city's current budget crisis in part on tax breaks draining city revenue.

Elvis, however, will likely get all that his people want to take care of their planned new business.

Thank you, thank you very much.