Home Table of Contents Tax Tips Credits Deductions Refunds State Taxes Politics/Laws Tax Terms Archives
School's back. So are some, but not all, education tax breaks
Would you trust your taxes to a robot?

The NBA is done with Donald Sterling.

The California tax collector, however, might still have an interest in some of Sterling's NBA-related expenses.

A California court this week approved former Microsoft CEO Steve Ballmer's $2 billion bid for the Los Angeles Clippers. A last ditch effort by Sterling, who was forced to sell the team, to retain the team failed. 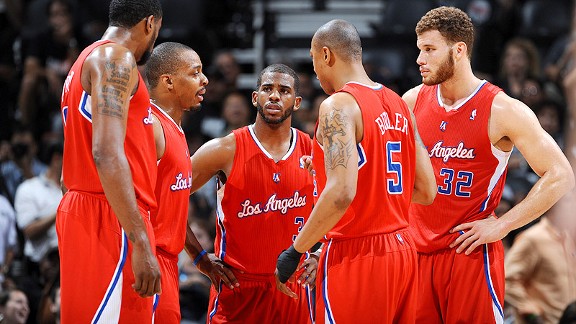 Los Angeles Clippers players discuss game strategy. The team's former owner will have to work out a new tax strategy if some state and federal lawmakers get their way.

But as the Sterling/Clippers drama was winding down, a state tax bill prompted by the controversial former NBA owner's bad acts was moving forward.

When NBA Commissioner Adam Silver banned Sterling for life from any league association and mandated he sell the team, he also fined Sterling $2.5 million.

The tax implications of that fine quickly became the focus of lawmakers, both state and federal.

No California tax deduction: In introducing AB 877 back in May, Democratic California Assemblymembers Raul Bocanegra and Reggie Jones-Sawyer touted the measure as one of tax fairness.

The bill would prevent Sterling and other California-based owners of sports franchises from deducting fines on their state tax returns.

Of course, it also was a way for lawmakers to whack Sterling for his reprehensible racist comments.

"Donald Sterling's outrageous comments and historic fine should not be rewarded with a multimillion dollar tax refund," said Bocanegra. "This fine is intended as a punishment; it should not be used as a tax loophole."

The California State Senate agrees. That state legislative body approved AB 877 on Aug. 11 by a 27-to-9 vote. It now goes to the Assembly.

Federal bill falters: A similar effort at the federal level, however, is going nowhere.

The Internal Revenue Code allows professional athletes, coaches and owners to deduct league-imposed fines from their taxes as itemized miscellaneous expenses as long as they are ordinary and necessary business expenses.

H.R. 4544, the Stop Penalizing Taxpayers for Sports Owner Fouls Act of 2014, essentially is identical to the Golden State's bill and would stop that tax deduction at the federal level.

The U.S. House bill, introduced by Rep. Tony Cárdenas (D-California), would prevent "an individual who owns (directly or indirectly) a professional sports franchise" from deducting any fines imposed by a sports league.

Like the California measure, H.R. 4544 would apply only to owners, not players who incur their league's financial punishment wrath.

Unlike the California measure, however, H.R. 4544 has been languishing on Capitol Hill. It's still in the House Ways and Means Committee, with no hearing scheduled.

Knee-jerk tax policy: That's where it should be. Compared to the other tax matters Congress needs to address, this bill is properly at the bottom of the legislative to-do list.

Sometimes specific acts can spur necessary law changes. But for the most part, that's not a wise way to legislate, especially when it comes to tax matters.

The legislation is too often narrowly tailored for the offending impetus. And like many laws, especially hastily drafted ones, it could have unintended consequences if it's ever enacted.

As Howard Gleckman of the Tax Policy Center's blog TaxVox pointed out when the House measure was introduced, "Sterling's remarks were obnoxious. The NBA's fine and other sanctions seem entirely appropriate. But the fine is clearly a deductible business expense. If Congressman Cárdenas wants to repeal the deduction for all franchisees, he should try. But just for Sterling (or other owners of professional sports teams)? I don't think so."

The Tax Foundation's Scott Drenkard also explains why he's for the separation of sports and state.

With that, I hope to never blog about Donald Sterling again, for tax or other reasons.

And I return my focus, at least on the sports front, back to baseball.

The MLB playoff season is fast approaching. The Orioles are leading the American League East. And there are afternoon games on MLB Network.