The raw numbers are bad enough.

Approximately 83,000 Department of Defense (DOD) employees and contractors had unpaid federal tax debt totaling more than $730 million as of June 30, 2012, according to a just-released General Accountability Office report. 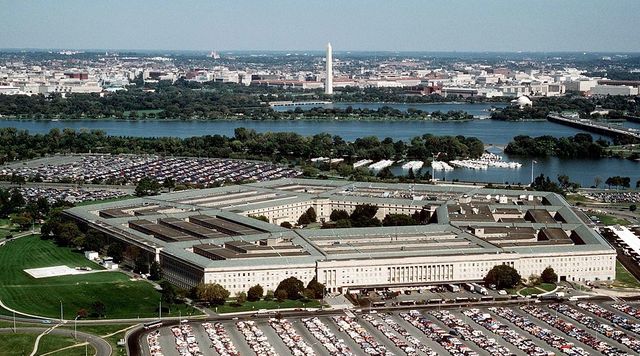 Southwest view of the Pentagon with the Potomac River and Washington Monument in background. Department of Defense photo by Master Sgt. Ken Hammond, U.S. Air Force, via Wikimedia.

But the news gets worse.

In "Security Clearances: Tax Debts Owed by DOD Employees and Contractors," the GAO also reveals that 26,000 or 31 percent of the DoD folks who owed Uncle Sam held or were eligible for access to high-level security information.

They had, according to the briefing paper for Congress, secret, top secret or sensitive compartmented information (SCI) clearances or related interim clearances.

By the end of June 2012 when the GAO was putting together its report, about 34,000 (roughly 41 percent) of the tax-delinquent defense area workers were in the process of taking care of their bills via a repayment plan with the Internal Revenue Service.

The individuals with repayment plans owed approximately $262 million of the overall $730 million in unpaid taxes.

Other key findings in the GAO's report on the 83,000 tax-owing individuals show that

The Office of Personnel Management, the independent agency that manages the civil service of the federal government, does not maintain information on the denial of security clearances on the basis of a person's nonpayment of federal taxes.

So, notes the GAO, there's no way to know how many individuals were denied clearance for not paying their federal taxes.

Unpaid taxes, no problem: Wait a minute. Why weren't all denied security clearance or had them revoked when it was learned they owed taxes?

Because, as the GAO report points out, federal law does not expressly prohibit an individual with unpaid federal taxes from being granted a security clearance.

However, says the government watchdog agency in its report, "delinquent tax debt does pose a potential vulnerability that is to be considered in making a broader determination of whether an applicant should be granted a security clearance."

"Specifically, federal regulations state that an individual who is financially overextended is at risk of having to engage in illegal acts to generate funds," continues the report, "and that adjudicating officials must weigh an individual's inability or unwillingness to satisfy debts, such as federal tax debts, as they relate to an individual's financial and personal conduct when making the security-clearance determination."

"It is vital that the Administration and Congress work diligently to eliminate potential threats that compromise the integrity of the federal workforce and the privileged information they safeguard," said Coburn following the release of the GAO findings.

The GAO didn't make any recommendations in connection with its report, but Coburn had one.

"We must take prudent precautions not only to enhance our security, but also to encourage federal employees to pay their share of taxes and live by the same rules that so many hard working Americans do," said Oklahoma's senior Senator.

More expected of federal workers: Overall, the number of high-level security DoD personnel who hadn't paid their full tax bills at the time of the GAO investigation was minuscule.

During the six years reviewed by GAO, there were around 3.2 million civilian and military employees and contractor approved for similar top level security clearances. So the fact that the number of noncompliant taxpayers in that group comes to less than 3 percent is not that remarkable.

Still, federal workers, whether on the full-time payroll or as independent hires, are -- and should be -- held to a higher standard since our taxes cover their checks.

And when national security issues are involved, the GAO and Coburn are correct. DoD workers need to step it up even more.