Senators are taking a shot at fashion bipartisanship today.

After a two-year absence, Seersucker Thursday returned to the upper chamber. 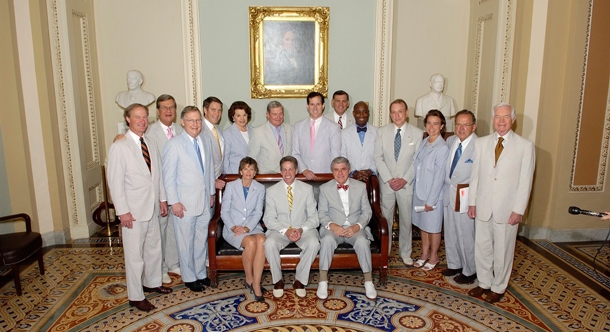 The official Senate Seersucker Thursday photo in 2006, courtesy U.S. Senate. This afternoon, Senators in their summer attire will gather again for a formal portrait of the chamber's first Seersucker Thursday in two years. ABC News takes a look at who wore it best this year.

As spring merged into summer back then, notes the Senate history Web page on the attire topic, southern Senators shed their heavy-wool black frock coats for lighter linen and cotton garments. In 1907, a New Orleans clothier created rumpled cotton fabric we know as seersucker. It was an immediate hit on Capitol Hill.

"Well into the 20th century, on the first warm days of spring, journalists routinely filed stories on the seasonal transformation evident in the poorly ventilated Senate Chamber," according to The New Members' Guide to Traditions of the United States Senate by Richard A. Baker.

Revived by Mississippi traditionalist: Trent Lott, who served as a Republican senator for Mississippi from 1989 to 2007, revived the tradition in the late 1990s.

He selected a "nice and warm" day in the second or third week of June to be designated Seersucker Thursday, on which day the male senators opted for a lighter fabric instead of their usual dark suits.

Female senators joined the fashion transition in 2004 at the urging of Sen. Dianne Feinstein (D-Calif.).

"I would watch the men preening in the Senate, and I figured we should give them a little bit of a horse race," said Feinstein.

In June, the House reinstated its Seersucker Wednesdays.

Today, the Senate rejoins the Congressional catwalk. It's once again Seersucker Thursday on the Senate side of Capitol Hill.

Workplace clothing tax deduction rules: While the House and Senate returns to periodic seersucker outfits may look like Congress has adopted a formal dress code, it's all in good fun.

That means that the new suits that Representatives and Senators have purchased for the tradition's revival are all on their own dime. They can't claim the new clothes as a tax deduction.

To deduct clothing as a business expenses, several requirements must be met.

First, the attire be required for your job.

The clothing also must not be suitable for wear outside the workplace.

While most of the newly nattily attired lawmakers probably won't wear their seersucker outfits outside the halls of Congress, they could.

And while there's a definite fashion debate when it comes to seersucker, it's perfectly acceptable in many places beyond Capitol Hill.

Finally, you must show that the clothing is an ordinary and necessary business-related expense.

To qualify as ordinary in tax parlance, the outfit is what others in your same line of work usually wear.

To be considered necessary, it must be worn in order for you to do your job. This is the case for law enforcement officers, firefighters, security guards and many medical professionals.

Miscellaneous write-off requirements: If your clothing qualifies as a tax deduction, you have one more tax issue to consider.

You can claim it only if you itemize, as a miscellaneous business expense on Schedule A.

And then you have to clear one more tax hurdle.

Your total miscellaneous expenses must exceed 2 percent of your adjusted gross income before you can deduct them.

One thing, though, that could help you get past the percentage limit is that cleaning costs for your work-required clothing also count as deductible miscellaneous expenses.