States are getting more of our money. How?
Hint: Tax collectors want us to keep shopping

While federal lawmakers, the media and we taxpayers continue to complain about how much of our money Uncle Sam takes, states are quietly pocketing more and more of our cash.

State governments collected a record $846.2 billion in taxes in fiscal year 2013, according to the U.S. Census Bureau. That's a 6.1 percent hike from fiscal year 2012 and the third consecutive year that states have raked in more of our tax dollars.

That $846.2 billion is also this week's By the Numbers figure.

Main revenue source: I know what folks in California, New York, my old stomping grounds of Maryland and good old TaxachuMassachusetts are saying. Damn those state and local income taxes.

The bulk of state tax collections in fiscal year 2013 were via sales and gross receipts taxes.

Almost half of states' revenues, 46.4 percent or $392.7 billion, came from our purchases, according to Census data. Of the 45 states that collect general sales tax, 38 states saw increases in these tax receipts from 2012. 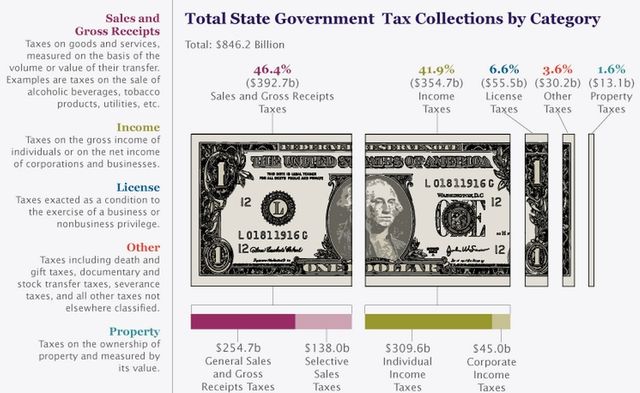 Details may not add to the total due to independent rounding. Source: U.S. Census Bureau

Income taxes accounted for the next largest amount and percentage of money -- $354.7 billion, or 41.9 percent -- that went to state tax collectors.

The remainder of our money that flowed into state coffers was via or license, property, and other taxes.

Sales tax important nationwide: OK. Overall sales taxes were the big revenue raiser. But surely in the 43 states that tax income, that particular levy was the big money maker, right?

But even in some states that do collect income taxes, sales and gross receipts collections were up substantially.

The Census Bureau's report shows that states with the largest percentage increase in tax revenue from general sales taxes were North Dakota (13.0 percent), South Carolina (9.3 percent), Hawaii (9.1 percent) and California (8.5 percent). Each of these states also collects income tax on their residents.

Sales taxes paid by outsiders: There is one piece of good news for taxpayers about all the sales taxes that states collected in 2013 and are collecting this fiscal year.

The Census Bureau notes that in many state tax cases, its revenues statistics show only the amount of various tax types collected within the state. The data does not differentiate how much is paid by individuals within a state.

This could mean, for example, that Florida’s general sales and gross receipts revenue is being paid in large part by the millions of out-of-state tourists who visit the Sunshine State annually.

"Therefore, using a per capita amount for this sales and gross receipts tax would be misleading to describe the tax burden for the state's citizens," wrote the latest report's authors in a summary of their findings.

Regardless of where the taxpayers live, the message from state tax collectors nationwide with the same: Keep shopping!

This is the beauty of an economic recovery.