LeBron isn't only game in town when it comes to sports, taxes

When LeBron James left the Cleveland Cavaliers for the Miami Heat in 2010, many tax watchers speculated that Florida's lack of a personal income tax played as big a role as a potential NBA championship.

This time, the thinking went, taxes also might keep him in the Sunshine State.

The Daily Signal, with help from the Heritage Foundation, ran the numbers on the teams believed in contention for James' services and the approximate income tax he might pay if he opted to play for one of them. 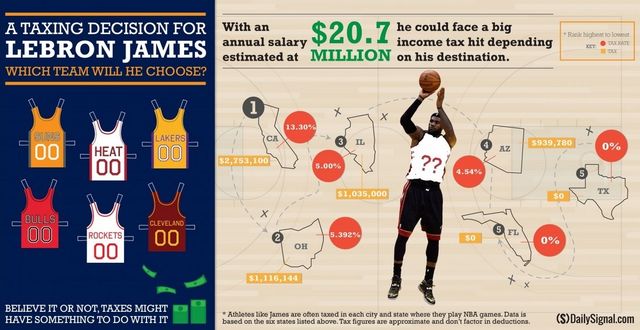 But as the "where will LeBron" waiting game played out this week, apparently sans tax considerations, there were some other tax-related sports happenings in the rest of the country.

NBA luxury tax: Let's stick with roundball. The LA Lakers had the sixth worst record in the NBA last year. Now that on-court insult has been slapped with a tax injury.

According to the Southern California newspaper:

The Lakers paid slightly more than $77.1 million in salary, about $5.3 million above the league's $71.7-million tax threshold.

The 25 teams under the tax line will receive $3 million of the taxpayers' combined  contribution, and the balance will go toward the NBA's revenue-sharing plan.

Washington weed and low taxes: When the Denver Broncos made it to this year's Super Bowl, much fun was poked at fans' potential Mile High celebrations since Colorado legalized recreational marijuana on Jan. 1.

But, says one Florida tax attorney, it's the combination of legal pot and low taxes that might make the home state of the Seattle Seahawks, the team that beat Denver for the 2014 NFL championship, more appealing to athletes.

The Evergreen State has no personal income tax. And as of July 8, recreational sales of weed are legal in Washington State.

The no-tax benefits for highly paid professional athletes, NFL and otherwise, is well documented. But the more liberal leisure time offerings of Washington also might be a lure.

"What are the chances the NFL athlete will prefer to live in a state where he can relax from the stress of the game and relieve his pain in that manner?" asks Roger Groves in a recent post on his Forbes' blog.

MLB deductible verdict: From the fun, if a bit smoky, speculation of what state laws might help teams hire athletes, we turn to one of the more disturbing sports-related incidents in recent years.

This week, an L.A. jury awarded Stow $18 million. The damages are to be paid by the two men, now serving jail time for the assault, who attacked him, as well as by the MLB team.

A team attorney put the Dodgers' share of the damages award at around $13.9 million. "If the Dodgers do not appeal and pay the verdict, there's no question this is a deductible business expense," writes San Francisco tax lawyer Robert W. Wood.

In his Forbes' blog,  Wood explains why the team can write off such an occurrence as an ordinary and necessary cost of doing MLB business.

Stadium tax fight drags on: Finally, we head to the sunny southwest where the financing outlook for Arizona's sports stadiums has run into some stormy tax weather.

A Maricopa County Superior Court judge has determined that a rental-car tax that funds the debt payments on the home fields of the NFL's Arizona Cardinals and the state's Cactus League teams is unconstitutional. The judge ruled that the state Constitution requires the tax be spent on highway-related uses.

If the ruling stands, the Arizona Sports and Tourism Authority could lose at least $12 million, about 30 percent of its annual revenue, to pay for University of Phoenix Stadium in Glendale and the spring-training baseball stadiums.

The sports authority says it will appeal the ruling, meaning the already decade-old tax fight could stretch into its 11th year. Meanwhile, reports the Arizona Republic, the 3.25 percent rental-car tax will continue to be collected and distributed to the authority.

Here's hoping that your sporting pursuits this weekend are not quite as taxing as these.

When I was a CPA in Ohio, I paid local income taxes to both the city I worked in and the city that I resided in for an effective rate near 4%. It was one of the reasons I decided to leave the state (and save nearly 7% of my salary in state and local income taxes).