"You don't need a fancy legal degree to understand that Congress intended for every eligible American to have access to tax credits that would lower their health care costs regardless of whether it was state officials or federal officials who are running the marketplace. I think that it's a pretty clear intent of the law." ~ Josh Earnest, White House press secretary 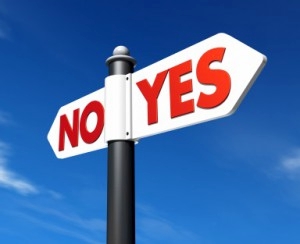 Some federal judges would -- and did -- disagree with the White House spokesman's assessment today of the health care subsidy issue. They issued rulings this morning (Tuesday, July 22) on the matter.

One court said the federal tax help is OK for all exchange buyers.

The other said no it isn't.

No subsidy for federal exchange buyers: Earnest's remarks came on the heels of the first, no, decision.

In that one, a split D.C. federal court panel decided that the Internal Revenue Service has no authority to offer folks a tax subsidy on their health care coverage under the Affordable Care Act, popularly known as Obamacare, if they bought it via a federal health exchange instead of a state-run program.

The 2-to-1 ruling by the three-judge panel for the United States Court of Appeals for the District of Columbia would mean that around four million folks who now have coverage via 36 federal exchanges wouldn't get any federal help in paying for their policies.

Note the word "would."

Today's ruling in Halbig v. Burwell will be appealed.

Legal expert Jeffrey Toobin expects today's finding to be overturned by an en banc (i.e., full) hearing of the D.C. appeals court. He's not alone in that thinking.

The ultimate decision, however, is likely to be made by the U.S. Supreme Court.

But that's a ways down the road. For now, nothing changes.

Tax subsidy for all buyers: The ultimate High Court involvement was made more likely because the D.C. court's decision is directly opposite that of another federal court panel's ruling this morning in a companion Obamacare subsidy case.

Across the Potomac and shortly after the Halbig ruling, three judges on the United States Court of Appeals for the Fourth Circuit in Richmond, Virginia, unanimously held in King v. Burwell that the federal subsidy is allowable for all exchange purchasers.

"The plaintiffs contend that the IRS's interpretation is contrary to the language of the statute, which, they assert, authorizes tax credits only for individuals who purchase insurance on state-run Exchanges. For reasons explained below, we find that the applicable statutory language is ambiguous and subject to multiple interpretations. Applying deference to the IRS's determination, however, we uphold the rule as a permissible exercise of the agency's discretion. We thus affirm the judgment of the district court."

That prior court ruling cited by Gregory was that the tax subsidy is allowed to all eligible health care policy purchasers, regardless of which exchange, state or federally-run, they used to buy coverage.

In his concurring opinion, Senior Circuit Judge Andre M. Davis, elaborates on the overall legislative intent issue, writing, "No case stands for the proposition that literal readings should take place in a vacuum, acontextually, and untethered from other parts of the operative text; indeed, the case law indicates the opposite."

Blame it on Congress: So Obamacare and its opponents battled to a legal draw today. But it's a war we shouldn't be fighting.

We wouldn't be parsing two conflicting court decisions if Congress had done its job.

Now waiting for the laughter to die down. Still waiting. OK. Just going to blog over it.

Every word matters in a lawsuit. It's the lack of language upon which the subsidy court filings were based.

In discussing the health care subsidies in the Affordable Care Act, a section of the law that applies to state-based exchanges is cited. If lawmakers had just added a few more words -- e.g., "as well as those exchanges run by the federal government" -- the intent of the law and the IRS' ability to issue the money wouldn't be a question.

It also wouldn't be a question if the Congress had done with Obamacare what it usually does used to do with legislation.

Back in the day when folks went to D.C. to represent the country and thoughtfully debate how to do that, the House and Senate actually legislated instead of using Capitol Hill as one big political soap box. That generally meant that a bill would be passed, implementation problems would be discovered (because that's the case with almost every law) and then they would make technical corrections to clear up things.

But because of today's intense political partisanship, Congress has abdicated its role in cleaning up and smoothing out bumps in the Affordable Care Act and the road that Americans must follow in applying the law.

So it's on the heads of the members of the do-nothing Congress, especially the Republicans who've consciously decided as a campaign strategy to not pass -- or technically correct via perfecting amendments -- bills, that we're dealing with all this wasted time, money and frustration.

Be sure to thank your Representative and Senators the next time you see them … or at the ballot box in November.

And keep an eye on the courts, which this embarrassing Congress has made a de facto member of the legislative branch, to finally decide on the Obamacare subsidies.