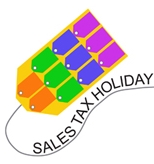 Three more will hold similar events deeper into the month. Massachusetts lawmakers are still pondering exactly when in August their shoppers will get some tax savings.

It's the usual sales tax holiday suspects. And although the annual events are often referred to as back-to-school tax holidays, there's a wide variety of items that are exempt for a few days from state and in many cases local sales taxes.

Not in N.C.: There is, however, one state missing. For the first time in 12 years, North Carolina won't be holding a sales tax holiday the first weekend of August.

The legislature canceled the late summer event, as well as a November tax holiday for Energy Star appliances, when it approved an overhaul of the North Carolina tax system that included lower corporate and personal income taxes.

Some North Carolinians, however, still might be making some shopping trips this weekend, especially if they live along the Georgia, South Carolina, Tennessee or Virginia borders. All of those neighboring states are holding sales tax holidays in the next few days.

The table below has details on the dozen early August sales tax holidays.

Tax holiday shopping tips: Everybody loves a bargain. And most folks think that getting one at the expense of the tax collector is even better.

So don't blow your savings. Here are three easy ways to be a prepared tax holiday shopper:

If you give in to impulse purchases, you'll blow any tax savings before you even get out of the mall.

Mark your calendars: Most of the so-called back-to-school tax holidays are the first weekend of August each year.

But some states operate on different timetables.

Four more states will hold their holidays later in the month. They are:

I'll post details on these states' tax holidays as the dates get closer.

Bay State lawmakers, however, haven't yet decided on the tax-free shopping days.

The two chambers have until the end of session tomorrow, July 31, to decide on one holiday date.

Don't panic, Massachusetts shoppers. Last year they went down to the wire. The 2013 holiday event wasn't signed into law until eight days before the start of last year's tax-free weekend.