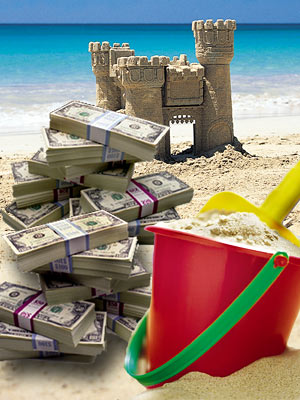 Taxes, tax havens and how Uncle Sam deals with folks who don't pay what they owe is always a good topic for a lively exchange.

This last week was full of such discussions.

While federal lawmen were wrapping up some individual tax haven evasion cases, another battle in the corporate tax haven war broke out.

Growing offshore businesses: The first volley in the corporate tax scuffle was fired on May 19 by Citizens for Tax Justice (CTJ), a nonprofit research and advocacy organization whose goal is "to give ordinary people a greater voice in the development of tax laws."

A CTJ study found "a diverse array of companies are using offshore tax havens" that allow them to avoid nearly $550 billion in U.S. taxes.

On top of the loss to the U.S. Treasury, CTJ's analysis says 28 of the corporations reveal that they have paid an income tax rate of 10 percent or less to the foreign tax collectors where the businesses' profits are officially held.

Big companies, big profits outside the U.S.: Apple and Microsoft have gotten the bulk of the attention from the media, Congress and the general public, but CTJ says other well-known U.S. brands are using the same tax strategy. 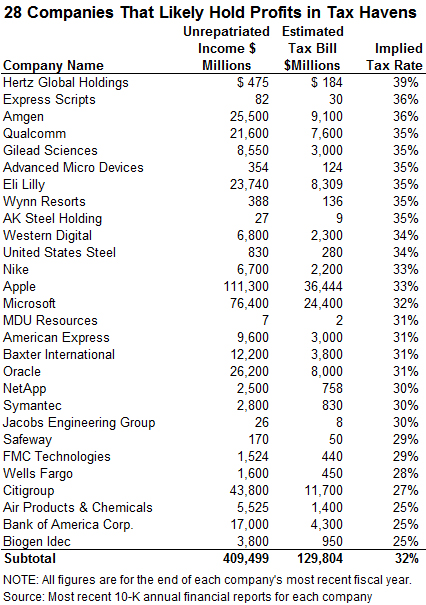 "These 28 companies are not alone in shifting their profits to low-tax havens," says CTJ. "They're only alone in disclosing it."

Most companies, says the Washington, D.C.-based think tank, don't want folks to know the U.S. tax rate they would pay if they repatriated their offshore profits.

Where the money goes: CTJ followed up that report with another on May 27 that revealed that American corporations' profits are held primarily in 12 foreign tax havens. 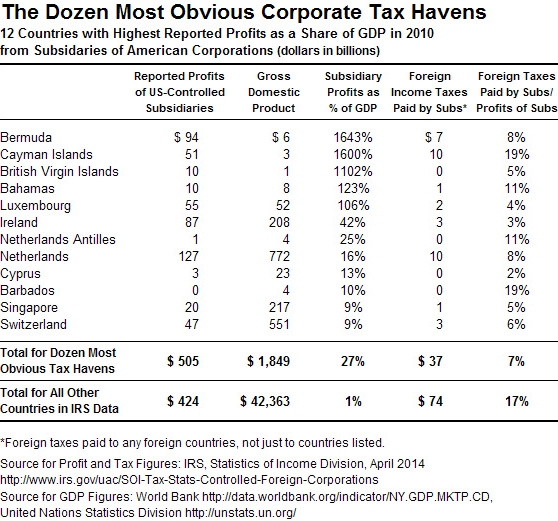 More notable, Internal Revenue Service data shows that the 2010 profits of American corporate subsidiaries were more than the entire gross domestic product (GDP) of the tax haven countries in which they were located.

Not so fast with those figures: Another nonprofit think tank in the nation's capital, however, has an issue with CTJ's tax haven country findings.

While the extent of tax savings or evading depending on your point of view is obviously debatable, that it's happening is a given.

"There's no doubt that U.S. corporations use a variety of legal methods to reduce their corporate tax bill on their overseas operations," writes Pomerleau. "It also may be the case that corporations use low-tax countries as a means to do so."

And he makes the valid point that it's difficult to measure the extent to which tax havens are used.

"All data sources have their flaws and it is best to be open about the limitations when doing these types of analyses," says Pomerleau.

Questionable resolution of Credit Suisse accounts: While the Tax Foundation and CTJ were duking it out over corporate tax havens, the Department of Justice and IRS were wrapping up a long-standing case involving individual use of tax havens.

Swiss bank Credit Suisse AG agreed on May 19 to plead guilty to a tax fraud charge and pay $2.6 billion in penalties. As I noted last week at my other tax blog, federal investigators hailed the deal, even though the penalty is a drop in the bucket for the bank and, unlike the earlier UBS case, U.S. tax officials got no information on the tax-evading account holders.

Meanwhile, an elderly Florida man who tried to do the right thing regarding his foreign bank account was slapped with $2.2 million in penalties.

That type of tax haven punishment disparity is why people tend to have, shall we say, a very low opinion of the tax collector.

Also last week at Bankrate, I looked at the dueling airfare tax disclosure bills pending in the House and Senate. The House would allow air carriers to break out their charges and display the amounts in separate places. The Senate wants to keep the current system of airfare amounts show as one sum with all taxes and fees included in the price.

I post my additional tax thoughts at Bankrate Taxes Blog usually on Tuesday and Thursday. If you miss the posts when they go up then and there, check the ol' blog the following weekend for a synopsis and links.