Anyone who uses a computer knows that unfortunate things happen. 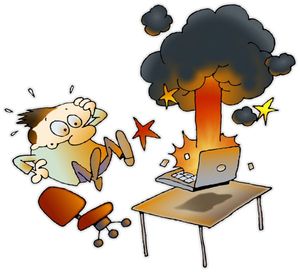 You hit a wrong key and that email you meant to send to just your best buddy ends up in the mailboxes of all your coworkers. Thank goodness at least the boss wasn't on that mail list!

A stray finger stroke and all your hard work disappears. Please, please, please IT guys, save me!

Or your machine suddenly decides to give up the ghost, taking your digitized life with it.

Well, it seems that our federal tax agency also has its own technology troubles.

Lost Lerner emails: The Internal Revenue Service says it can't provide Congressional investigators with some emails they want regarding the agency's review of nonprofit groups' applications for tax-exempt status because of a computer crash.

Several Capitol Hill committees want to review the communications of Lois Lerner, the former head of the IRS' Exempt Organizations unit, to determine if she and colleagues specifically discussed how to handle the tax-favored requests of Tea Party affiliated organizations.

But, in a background document attached last week to an IRS letter to Congressional investigative panels, the IRS said it "has determined that Ms. Lerner's computer crashed in mid-2011," making it impossible for the tax agency to locate her emails from January 2009 to April 2011.

Unhappy with IRS pace: GOP investigators in the House already have been upset with the pace of the IRS in providing background material they want for their probes. Specifically, they are looking into whether the granting of 503(c)(4) tax status was politically motivated when it started in 2010.

To determine that, they have demanded all of Lerner's emails, not just those specific to the applications in question.

So far, more than 250 IRS employees have spent more than 120,000 hours and $10 million tracking down material requested by Congressional investigators, including 24,000 of Lerner-related electronic communications.

And while the agency has or expects to hand over around 67,000 emails relevant to the investigations, it can't locate the batch that was on Lerner's computer when it crashed in mid-2011.

Outrage over lost documents: As you might suspect, Republicans are not happy with the missing emails.

"The fact that I am just learning about this, over a year into the investigation, is completely unacceptable and now calls into question the credibility of the IRS' response to Congressional inquiries," said House Ways and Means Committee Chairman Dave Camp (R-Mich.) in a statement following the IRS announcement of the lost emails.

"Just a short time ago, [IRS] Commissioner Koskinen promised to produce all Lerner documents. It appears now that was an empty promise," said Camp.

"Frankly, these are the critical years of the targeting of conservative groups that could explain who knew what when, and what, if any, coordination there was between agencies. Instead, because of this loss of documents, we are conveniently left to believe that Lois Lerner acted alone," said the head of the House tax-writing committee.

Conspiracy or clowns? The key question, operationally and politically, is whether Lerner and her staff were getting direction from outside entities on how to handle the applications.

Although the Exempt Organization division did give extra scrutiny to all groups that had overt partisan affiliations, including progressive and liberal organizations, the handling of applications by conservative and specifically Tea Party groups has garnered most attention.

And those of us of a certain age, regardless of our political affiliations, are seeing embattled images of Rosemary Woods and Richard Nixon's Watergate tape recordings. That seemed to be implicit in another Republican lawmaker's reaction.

"Thirteen months into the investigation the IRS reveals that key emails from the time of the targeting have been lost. And they bury that fact deep in an unrelated letter on a Friday afternoon. In that same letter, they urge Congress to end the investigations into IRS wrongdoing," said Rep. Charles Boustany Jr. (R-La.), chairman of the Ways and Means Oversight Subcommittee.

"If there is no smidgeon of corruption what is the Administration hiding?" asked Boustany.

Speculation continues: Ideally, everyone -- members of Congress and all us taxpayers -- would get the full story on the IRS' handling of the tax-exempt status applications.

At best, it was incredibly inept. These kind of missteps raise doubt as to whether the agency could pull off some grand conspiracy.

Plus, what political good would have been gained by slowing down the official tax status of a handful of groups? Most were not large and the organizations still were able to conduct their activities as they wished, just not with the formal imprimatur of a more tax-favorable status.

Yes, I know. I brought it up so I'll address it -- Watergate itself was a speck on the political screen. It was the cover-up that killed the Nixon Administration. That could be the case here, too.

And not to be too skeptical, but this latest IRS screw-up with the emails actually is good news for Obama Administration opponents. Absent any smoking gun, they are free to continue to speculate at will as to how and who managed the plot.

While you might know a lot about taxes, you don't a clue about IT and computers based upon this post.

This is the IRS we are talking about not some two bit operation running out of someone's basement.

They have data retention procedures in place. Emails are typically NOT stored on a desktop and in fact for compliance reasons are archived. So to say the "dog ate her homework" pretty much makes the statement that this was in fact a coverup.

In addition since the emails were stored on a server a server isn't like a desktop. Servers have many redundancies in place. RAID, daily backups, etc...etc. etc... In addition even if something is deleted on purpose and no backups there are ways to get most or all of the hard drive (even if badly damaged)

"So far, more than 250 IRS employees have spent more than 120,000 hours and $10 million tracking down material requested by Congressional investigators, including 24,000 of Lerner-related electronic communications."

I find it such a joke for the IRS to claim it took over 250 individuals and $10M to find the 24,000 emails. Only in government would such a BS statement would be made. Either they are incompetent, wanting more government money or both.

I could go into all of the technical details of the issue, but the point is your statements are wrong.

This is a cover up plain and simple and no accident.

Ponder this: Even if the statements made were true, we want the same org to deal with our healthcare if they are this careless with data?