Transportation Department Secretary Anthony R. Foxx has been warning Congress for months that the Highway Trust Fund, the main pot of money Uncle Sam uses to pay for his/our highways, is running low.

If something isn't done quickly, DoT data indicates that the trust fund is likely to dip below the critical $4 billion funding level as soon as July. Sometime in August, the transit account is projected to fall below $1 billion.

The problem is simple. As the chart below shows, not enough money is coming into the trust fund to meet the level of transportation spending that is being advocated. 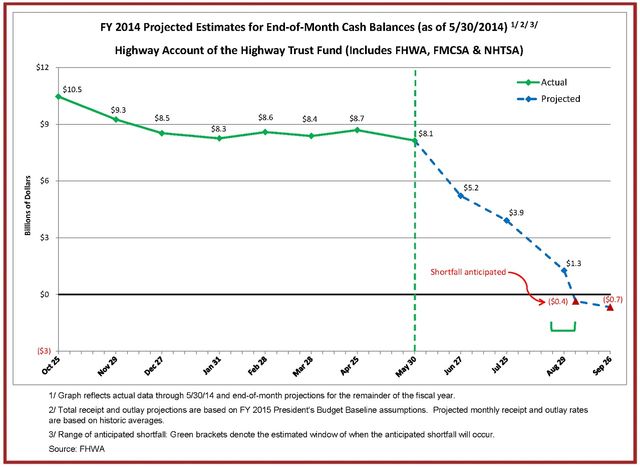 The Highway Trust Fund is replenished primarily by the 18.4 cent federal gas tax. That tax, says DoT, brings in about $34 billion per year. The current level of transportation infrastructure spending, however, is about $50 billion annually, most of which goes as grants to state and local governments to pay for road and related projects.

At the current pace, the Congressional Budget Office has projected that the Highway Trust Fund will go bankrupt in the fall without additional Congressional action.

Plus, the House and Senate are also facing the fiscal year deadline, Sept. 30, to renew the federal government's legal right to collect the gas tax at all.

Lawmakers have tossed out a variety of proposals to make up the fund's growing shortfall.

Tax repatriation holiday: Sen. Rand Paul (R-Ky.) and Senate Majority Leader Harry Reid (D-Nev.) have suggested a one-time tax holiday on offshore earnings to add to the transportation pot. A similar proposal in the House is sponsored by Rep. John Delaney (D-Md.) in the House.

But Sen. Ron Wyden (D-Ore.), who heads the Senate Finance Committee that must sign off on that chamber's tax proposals, says such a plan wouldn't yield enough money to make any difference.

"You do not pay for roads and bridges and transit with imaginary savings," Wyden told Bloomberg News. "There isn’t any magic money sitting around on the street corner."

Post Office cuts: The Republicans leadership suggested getting highway money by making cuts to the U.S. Postal Service as part of a broader postal-reform measure.

One idea that's been tossed about in recent years is to allow (require?) the Postal Service to scale back delivery standards.

Any Highway Trust Fund/Post Office connection, however, faces stiff opposition from both sides of the aisle.

More liberal lawmakers don't want to cut programs -- and jobs -- they see as vital to many communities, especially those in rural areas.

Conservative groups say proposals such as Post Office cuts are gimmicks. Any help provided to the transportation area would likely require spending down the road in the form of a bailout of the Postal Service.

Raise the gas tax: And so we return to taxes. 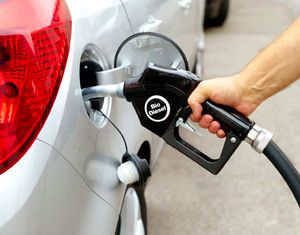 The prime financing source of the Highway Trust Fund is a federal gasoline excise tax that hasn't been raised since 1993. Sens. Chris Murphy (D-Conn.) and Bob Corker (R-Tenn.) say it's time for that to change.

Murphy and Corker want to hike the gas and diesel excise taxes by 6 cents in each of the next two years. The current gas tax is 18.4 cents a gallon; the diesel tax is 24.4 cents a gallon.

The added 12 cents to each, say the Senators, would provide enough funding to offset current spending levels over the next 10 years and replace all of the buying power the federal gas tax has lost to inflation since it was last raised in 1993.

And speaking of inflation, after the 12-cent hike spread across two years, Murphy and Corker call for future gas and diesel tax increases to be indexed to inflation. The Senators say their proposal would raise $164 billion for transportation projects over the next decade.

The 12 extra pennies we drivers might soon be seeing show up on gas pumps also is this week's By the Numbers figure.

"I know raising the gas tax isn't an easy choice, but we're not elected to make easy decisions, we're elected to make the hard ones," said Murphy in a joint statement with Corker about the bill. "This modest increase will pay dividends in the long run and I encourage my colleagues to get behind this bipartisan proposal."

Surprising tax support: Whenever tax increases are proposed in the current political climate, the immediate reaction on Capitol Hill and beyond is a quick "no way."

The Murphy-Corker idea, however, is getting support from a wide range of transportation advocates, from road builders to AAA.

Which way will Congress go in patching the major potholes in our transportation funding system?

Whatever vehicle they choose, they need to decide quickly.

Lawmakers have repeatedly said they want to consider solutions to the Highway Trust Fund troubles by their July 4 recess. That means action this week.

Nothing has been formally scheduled yet. If something isn't done soon, though, our road repairs will be operating on fumes. And every driver knows that's a terrible situation.