Calories or volume: Which is the better tax on sugary drinks?

Are you counting calories and still not losing as much weight as you'd like? Maybe counting taxes on the calories would help. 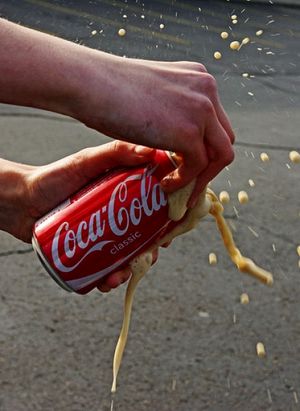 A .04 cent per-calorie tax on sugary beverages would reduce consumption by 5,800 calories per person annually, according to a new Robert Wood Johnson Foundation (RWJF) study.

Plus, says the study, the fractional per-calorie tax would save soda and other sweetened beverage drinkers money.

Under the usual system of taxing sugar-sweetened drinks by volume, consumers pay the same tax whether they buy a 12-ounce sweetened drink with 150 calories or the same size beverage with added sugar but only 50 calories.

Using the RWJF calorie tax method, the more fattening beverage would cost 6 cents more. The same-sized drink with less calories would have only a 2-cent tax added.

And larger drinks with less calories would, comparatively, be even cheaper.

Win-win for waistlines and wallets: The thinking is that the twofer of fewer calories for less money would lead more beverage buyers to pick the healthier drink.

In a head-to-head showdown of the per-calorie and ounce-based drink taxes, RWJF researchers say their 0.04 cent calorie tax would save consumers nationwide around $736 million per year.

The Foundation funded the calorie tax study through its Healthy Eating Research national program. It was published online by the American Journal of Agricultural Economics.

RWJF says it is the first major study to simultaneously model taxing sugar-sweetened beverages per calorie, accounting for consumers' substitution across beverages, and examining the financial impact on consumers.

There's just one factor, though, that RWJF didn't take into account.

Beverage manufacturers and retailers could entice thirsty consumers to buy bigger, higher-calorie drinks by dropping the price enough to offset any type of drink taxes.

Same idea, different tax methods: The RWJF study is not the first to look at the possible advantages of a per-calorie tax.

In June 2013, a National Bureau of Economic Research working paper indicated that raising the price of all food purchased for home consumption based on calories might significantly lower the percentage of body fat in young people.

But most governments that explore soda and other types of fax taxes tend to focus on volume-based measurements.

That's the case in Mexico, which last year enacted a by-ounce tax on sugary drinks (and fast food) last year.

Similar soda taxes based on container size have been proposed in recent years by several U.S. states and cities. The proposals, however, have been met with public resistance.

Will U.S. soda slurpers find a calorie tax any tastier?