Kimye wedding done, but Clooney vows set for September ... along with a tax bill for fiancé Alamuddin's engagement ring

Sad that Kimye's wedding is over? Me neither.

But I am surprised that Kim Kardashian and Kanye West didn't milk their nuptials for even more attention. Yes, given all the pop culture magazines that line my grocery's checkout stands and the tabloid style television shows that fill too many hours, that would have been very possible.

Now all we've got is the countdown of whether these vows last longer than Kim's last tying of the knot.

At least celebrity romance addicts won't be left wanting for long. They now can focus on the upcoming "I do's" between George Clooney and Amal Alamuddin. 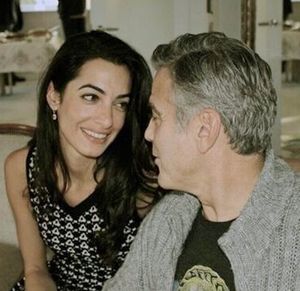 The location is yet to be determined, but the choice of the wedding day apparently was easy. It's the one-year anniversary of when the couple began dating.

While details of the next big celebrity wedding ceremony are up in the air, one thing is more certain.

The symbol of Clooney's love for Alamuddin, that seven-carat emerald cut ring he put on her left hand, is going to cost the Hollywood heartthrob some serious English tax dollars.

The tax price of love: London's Daily Mail reports that Clooney may have to cough up a nearly six-figure payment in British pound sterling (or solidly six figures in U.S. dollars) to the United Kingdom taxman in connection with Alamuddin's £415,900 (around $700,000 U.S.) engagement ring. 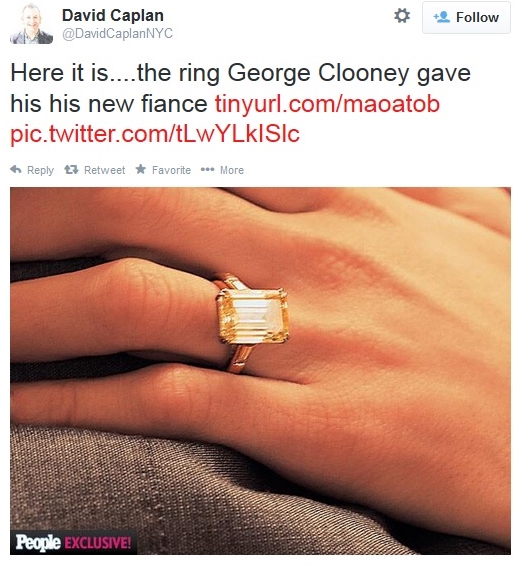 The tax was triggered, says the British tabloid's Girl About Town gossip columnist Charlotte Griffiths, when Alamuddin wore the ring "as she strolled through customs at Heathrow on May 13, after celebrating her engagement in Malibu with friends including Cindy Crawford."

British travelers who arrive in the United Kingdom from a non-European Union country must pay customs duty and import value added tax, or VAT, on all goods that exceed the stated allowances. Duty on a diamond ring like British barrister Alamuddin's would be 2.5 per cent of the total value, or £10,397.50 ($17,500+/- U.S.), plus the import VAT of 20 per cent of its value.

A spokesman for Her Majesty's Revenue and Customs (HRMC), the U.K. version of the Internal Revenue Service, told the newspaper, "Bringing in goods bought from outside the EU, whether in person or through the post, could attract customs duty or import VAT. Customers should check the current limits on our website."

Whatever the Queen's cut, I doubt it will make much of a dent in Clooney's or Alamuddin's bank balances.

Regardless, what's money when it comes to true love?

What a stunning ring