Congressional gridlock generally is a problem, not just for folks on Capitol Hill, but also for all of us who are impacted by legislative inaction.

Take the tax extenders. By delaying action on this collection of 50-plus tax breaks, all of us who depend on any of these expired provisions are in limbo as to what tax-planning moves to make.

But there is a very thin silver lining in the delay.

It means there's more time to fight a bad provision in the bill, the requirement that the Internal Revenue Service once again use private debt collectors, or PDCs, to follow up on delinquent tax bills. 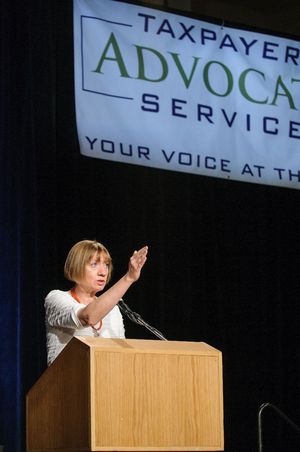 The IRS' National Taxpayer Advocate Nina E. Olson is doing just that. Olson has let Representatives and Senators know in no uncertain terms of her opposition to the prospect that debt collectors might be once again foisted upon taxpayers.

Taxpayer Advocate reiterates her opposition: The turning over of some delinquent tax bills to debt collectors is part of the tax extenders legislation, known as the Expiring Provisions Improvement Reform and Efficiency (EXPIRE) Act, that stalled in the Senate last week after Republicans objected to a no-amendments rule.

Sec. 305 of the bill wouldn't give the IRS a choice to use private bill collectors, which it already has. It would require the agency to do so in some delinquent tax cases.

The mandate was inserted in the EXPIRE Act by Sen. Charles E. Schumer (D-N.Y.), whose state is home to two of the four private collection agencies that would benefit from the law.

As I've blogged many times over the years, IRS use of private bill collectors is a bad idea that's been tried, and failed, before.

Olson remembers those ill-fated private tax collection efforts and, as she phrased it, still has "significant concerns" about the concept.

She detailed her worries in a 21-page letter to members of the House and Senate tax-writing committees:

"The Office of the Taxpayer Advocate and I personally were intimately involved in the development of the 2006-2009 PDC program. We also handled more than 3,700 cases involving taxpayers against whom PCAs [private collection agencies] sought to collect.

Based on what I saw, I concluded the program undermined effective tax administration, jeopardized taxpayer rights protections, and did not accomplish its intended objective of raising revenue. Indeed, despite projections by the Treasury Department and the Joint Committee on Taxation that the program would raise more than $1 billion in revenue, the program ended up losing money.

We have no reason to believe the result would be any different this time."

Rather, says Olson, she supports the current collection system under which the IRS has flexibility in dealing with delinquent taxpayers who are willing to pay, can't pay and won't pay. This flexible approach to taxpayers' differing circumstances and intent is critical to maintaining a fair and balanced tax system, says Olson.

That would be undermined under PDC system. Even more troubling, says Olson, the current proposal would mandate a vast expansion of the PDC program compared with the 2006-2009 version, which essentially did not produce desired collection results.

A dozen debt collector concerns: Olson details a dozen concerns she has with the proposed private debt collection that would be mandated under EXPIRE.

They include the mistaken belief that the IRS does not collect taxes on cases that are inactive or awaiting assignment to significant start-up and continued operational costs to the effect the program would have on low-income taxpayers to potential privacy concerns to abusive collection procedures by debt collectors.

Finally, Olson says she and others in the Taxpayer Advocate's office are uncertain what the PDC mandate is intended to accomplish.

Not to be too cynical or repetitive, but you did notice that two of the four debt collection agencies that would get the new business, ConServe of Fairport, New York, and Pioneer Credit Recovery of Arcade, New York, are constituents of the Senator who added the provision.

Schumer promises limits: Schumer defends his proposal as not only being a way to get unpaid tax money, but also as a jobs creator.

"This program would create hundreds of jobs in two of the poorest areas in New York, all while increasing federal revenues and not costing a single government job," Schumer said in a statement issued to the Washington Post.

"We have crafted a plan that has the safeguards necessary to protect taxpayers, the infrastructure to make it work effectively, and the resources it needs to succeed. Both on the merits of the program itself and for jobs in New York, it makes eminent sense," Schumer said.

Olson isn't buying it. Neither is IRS Commissioner John Koskinen, who in a recent hearing before the House Ways and Means Committee also urged lawmakers to reject the debt collector idea.

Consideration date unsure: Senate Majority Leader Harry Reid (D-Nevada) had hoped to bring the extenders back to the upper chamber again this week. That prospect apparently is fading.

The Senate Finance Committee's leaders, Chairman Ron Wyden (D-Oregon) and Ranking Minority Member Orrin Hatch (R-Utah), reportedly are working on an amendment process that would satisfy both their parties and get the bill headed to the House for further consideration. Tax Analysts reports, however, that outside observers, including former staffers, doubt that the two positions can be reconciled, at least not soon.

So the stalling of the EXPIRE Act actually might have been a blessing, allowing opponents of the private debt collection provision more time to work on having it removed.