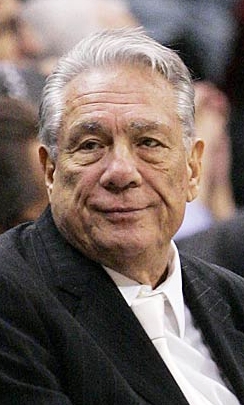 We saw this coming. Congress is getting in on the whacking of Donald Sterling.

The owner (for now) of the Los Angeles Clippers professional basketball team has been catching heat, justifiably, all around after audio tapes revealed Sterling's recent racist remarks.

NBA Commissioner Adam Silver banned Sterling for life from any association with the team or the league. Silver also asked the NBA's other owners to formally force Sterling to sell the team, which could cost him millions in capital gains taxes.

And Sterling was fined $2.5 million.

Deducting league fines: It's the fine that caught the eye of some U.S. Representatives.

The financial punishments generally are viewed as ordinary and necessary business expenses paid or incurred during the taxable year in carrying on their business.

The key phrase is ordinary and necessary. The Internal Revenue Service's interpretation of which business expenses are deductible depends on the industry.

The way the sports world turns nowadays, the various fines handed out in every league every year are, sadly, commonplace and apparently required to keep folks doing their jobs properly.

That means the professional sports team employees can claim their fines on Schedule A as an itemized miscellaneous deduction for unreimbursed employee expenses.

The only limitation is that the deduction for the total of all miscellaneous expenses must exceed 2 percent of the taxpayer's adjusted gross income.

Cutting off the deduction: Any deduction is just not right, say six House Democrats. So they've introduced the Stop Penalizing Taxpayers for Sports Owner Fouls Act of 2014.

The bill's legislative number, H.R. 4544 is this week's By the Numbers figure. 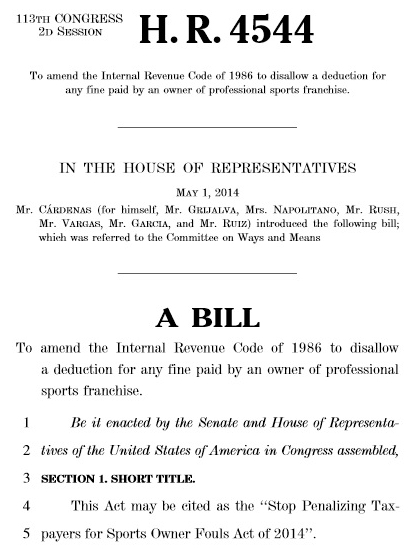 "This loophole is unacceptable," said Cárdenas. "My legislation will close the loophole, ensuring that these owners are the only people who bear financial accountability for their behavior."

Long history of deductible league fines: In announcing the legislation, Cárdenas noted not only Sterling's fine, but also those issued previously against Mark Cuban, owner of the NBA Mavericks; Eddie DeBartolo, former owner of the NFL's San Francisco 49ers; and the late Bud Adams, who owned the Houston Oilers/Tennessee Titans.

"Being fined for violating the rules of your league is not the same as a shop owner on Main Street paying to have a new sign hung in front of their business," said Cárdenas. "One is a business expense, the other is a punishment. The American people are happy to help small businesses grow, but paying to NBA fines for multi-millionaires, subsidizing bad behavior, should not be the responsibility of American taxpayers."

Plus, noted Cárdenas, many owners are already receive substantial taxpayer funding and tax loopholes related to stadiums and other infrastructure.

Limited effect: H.R. 4544 is pending in the Ways and Means Committee. If it is enacted, it would apply to owners' fines imposed since Jan. 1, 2014.

The bill specifically prohibits only "an individual who owns (directly or indirectly) a professional sports franchise" from deducting the league's fines. Players aren't mentioned.

So when a professional team's players are financially disciplined, they can still claim their fines as miscellaneous tax deductions.

Why limit it to team owners? Say a player uses the n word on an official and gets ejected out of the game and fined by the NFL. Why not have this apply to them too?