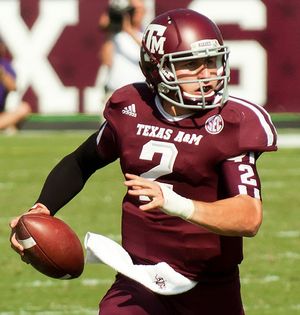 Sportswriters and broadcasters, not to mention all the Cowboys haters out there, were soooo disappointed when the Dallas NFL team took a draft day pass on Johnny Manziel.

I, however, as a life-long Cowboys fan was stunned and incredibly relieved that ringmaster extraordinaire Jerry Jones decided not to add another clown -- no offense Johnny Football -- to the giant circus that is Jerry World.

Manziel was a bit stunned, too. But he definitely was not pleased.

As a native Texan whose college career was at Texas A&M University, Manziel made no secret of his wish to play for one of the Lone Star State's NFL teams.

Staying close to home was no doubt part of the reason Manziel wanted to play for the Houston Texans or Dallas Cowboys.

But taxes also were likely part of his -- or at least his financial manager's -- wish to stay full-time within Texas' borders.

No tax, jock tax: Texas is one of seven states with no personal income tax at all.

Playing here would give Johnny Football eight home games a year plus any pre- and post-season (yeah, yeah, playoff games in Houston, not Dallas) match-ups where he wouldn't have to worry about the jock tax.

The jock tax is the levy that states and municipalities with personal income taxes impose on visiting athletes and entertainers when they work within their jurisdictions.

Ohio is one of those jock tax collecting states. Its top personal income tax rate is 5.421 percent.

And although Berea, Ohio, where the Brown's FirstEnergy Stadium is located, doesn't have a local income tax, 39 Buckeye State cities do. Cleveland's is 2 percent.

The NFL bottom line for Manziel is that Ohio will take a cut out of his home-game earnings. The tax collector is looking forward to it. Manziel salary is projected to be $8.25 million over the next four seasons.

Texas true: A couple of sports financial experts, however, say that there's a way for Manziel to limit what he pays Ohio's tax collector.

He simply needs to make sure Texas remains his legal state of residency.

Manziel can still avoid Ohio's income tax on most of his endorsement earnings simply by making sure that he remains a Texas resident. He's thus likely to keep his Texas residency and not avail himself of Ohio tax law unless it's absolutely necessary. A local trading card show or endorsement for a Cleveland car dealer would trigger Ohio tax law, but national endorsement deals would not. Expect Manziel to avoid spending 182 days in Ohio, as doing so would risk him being classified as a "full-year nonresident" under Ohio law and having higher taxes.

So Texas-based Johnny Football fans, expect to see your man still spending a lot of time in our state. He'll be hanging around not just because he loves it here, but because it will save him taxes.