The best day in auto racing is two-thirds over, with the checkers having waved for the Formula 1 race along Monte Carlo's streets and at the Indianapolis 500.

We race faces now await the green flag for NASCAR's longest race of the season, 600 miles that will end under the lights at Charlotte Motor Speedway.

One of the reasons I like watching races is that I get glimpses of incredible pieces of engineering. That's especially true of the F1 vehicles.

I seen some of these magnificent autos, both the racetrack and regular road versions, on trips the hubby and I have taken.

And back in 2012, we spotted a McLaren MP4-12C, which back then Edmunds said would cost (with a medium amount of options) around a quarter of a million dollars, in the parking lot of a fast food eatery in our neighborhood. I guess the owner was able to afford such a flashy ride by cutting dining corners. 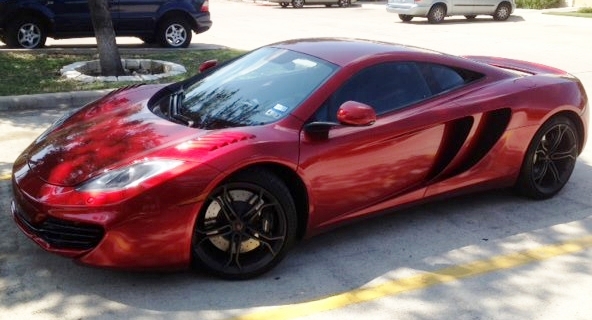 Yes, we stopped for a closer look. In fact, we got out of our car so the hubby could snap cell phone photos, like the one above, of the jealousy-inducing McLaren while I stood guard in case the owner came running out of the restaurant to shoo us away.

So I totally understand the desire of those with much more disposable income that the hubby and I have to own comparable autos.

And as a follower of taxes, I also understand the desire of jurisdictions to collect money on all sorts of things, including exotic, collectible vehicle.

Gonzales, a fan of fancy autos, in 2000 purchased a 1998 McLaren F-1 vehicle from a German seller through a Missouri-based car dealer. The car was impounded by U.S. Customs for a year so that Environmental Protection Agency-mandated adjustments could be made to be made to the car.

After the emissions alterations were made and Gonzales also got a Department of Transportation exemption for safety requirements, the McLaren was released in 2001 and transported to one of Gonzales' California homes, where it was to be garaged.

Meanwhile, Gonzales was diagnosed with gastric cancer and he died before the car arrived. However, as part of his estate planning, Gonzales transferred ownership of the McLaren to his father, who subsequently became executor of his son's estate and the trustee of an administrative trust.

Collectible car or demonstrator? In connection with the McLaren purchase, the Internal Revenue Service assessed the luxury automobile excise tax, as well as the federal gas guzzler tax.

Those two levies came to more than $46,000. Gonzales' estate paid the taxes and filed for a refund.

When the IRS rejected the refund request, the Gonzales estate filed suit in Federal Claims Court arguing that the vehicle was eligible for the Internal Revenue Code's exception for demonstrator vehicles.

It was never driven on U.S. public streets, notes the filing, either during Gonzales' ownership or after transfer to his father. Such treatment, argued the Gonzales estate, clearly indicated his intent to display the vehicle to other car collectors, not to use it as a means of transportation.

The IRS countered that the demonstrator exemption was created to allow car dealers to display luxury vehicles as an inducement for customers, not as an out for private car collectors.

Sorry, Gonzales estate, but the court sided with Uncle Sam.

For tax purposes, the Federal Claims Court said the relevant consideration was whether the car was a collector's item or a demonstrator model used for sales. In the case of Thomas Gonzales, ruled the court, collecting was the primary reason for the F1 vehicle purchase.

So the luxury tax was upheld.

When is a car not a car? Then there was the gas guzzler tax that is imposed on autos that get very low miles per gallon.

The Gonzales estate argued that since the McLaren was an F1 race car, not a vehicle manufactured primarily for driving on public roads, it does not fall within the definition of "automobile" under the gas guzzler statute.

Sorry again, Gonzales estate, but the court didn't buy that argument either.

The Federal Claims Court found that the F1 was designed for public road use (albeit normally on high profile roads like those in Monte Carlo) and as such is an automobile under the gas guzzler statute.

Given that evidence, wrote Chief Judge Patricia E. Campbell-Smith in her April 30 order:

"The court finds that the McLaren F1 was designed for public road use and qualifies as an automobile under the statute.

Although such an expensive and rare vehicle most likely would be driven infrequently and treated as a collector's item, the court is not persuaded that the expectation of limited road use serves to remove the car from being otherwise defined as an automobile."

I appreciate the Gonzales estate's effort to recoup taxes it paid on the McLaren F1 auto, but all of us auto and race fans totally agree with the judge.

And I guarantee that if I had such a fine piece of engineering, I'd be tooling around Austin streets every damn day!