What would you say in a letter to the IRS? Former Secretary of Defense Donald Rumsfeld decries tax code complexity

I've occasionally jotted a note on a 1040. Usually it was to bring Internal Revenue Service attention to an attachment I included or to explain why an examiner might find an entry, shall we say, intriguing.

But for the most part, I don't carry on written conversations with the tax man or woman.

The former secretary of defense who most recently served in the George W. Bush administration apparently writes a letter to the IRS each year and sends it along with his tax return.

We know this thanks to Rummy's announcement on Twitter:

Rumsfeld, like many of us, is frustrated by the complexity of the tax code. It's so confusing, he says, he's not sure if he's filled out his return correctly.

And his wife, writes Rumsfeld, signed their joint return but is just as baffled as he is about whether they are paying the proper amount of tax.

We've all been there at some point, Mr. Secretary.

Trust me. If you did something wrong on your 1040, the IRS will let you know.

But if you feel better venting each April 15, keep going for it ... at least until we get comprehensive tax reform that brings simpler tax laws. It could be a wait, though. It's been 28 years since we've had an overhaul of the Internal Revenue Code.

To speed up that possibility, let me suggest Mr. Rumsfeld that you send copies of your letter(s) to your members of Congress. Representatives and Senators are the ones who are responsible for the tax laws with which we must deal. The IRS primarily just administers the laws.

You can read Rumsfeld's 2014 tax filing thoughts in his letter below. 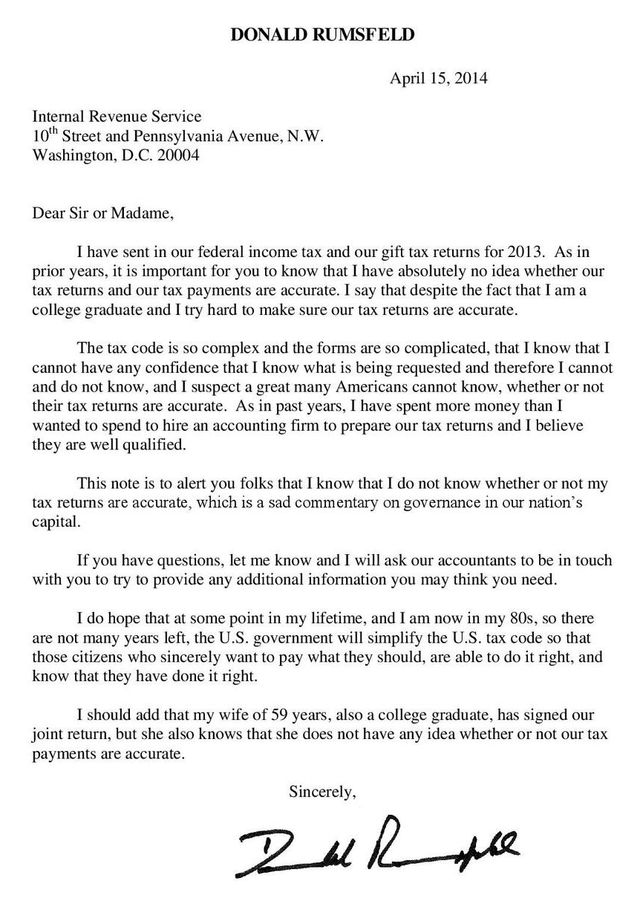 Have you ever written the IRS or your members of Congress about your taxation frustrations? What did say or suggest? We -- Rummy and I -- would love to hear.

Don, you should know better. You are complaining to the wrong governmental department. The IRS doesn't make the tax laws, Congress does. The IRS is only the messenger. Tell you Congress person to fix the tax code!

I love it! Perhaps we should all start sending such letters to Congress. It could be a movement :)