3 popular refundable tax credits: Are they worth it?

Tax credits are great tax breaks. They apply after you figure what you owe Uncle Sam and help reduce your tax bill dollar-for-dollar. 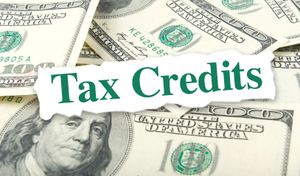 Refundable tax credits are even better. As the name indicates, they can eliminate any tax you owe and any excess credit is sent to you as a refund.

From an eligible taxpayer's perspective, the answer to the question about refundable credits' worth is a hearty, "Definitely!"

But from a wider point of view, many argue that refundable tax credits are not the best or most efficient way to provide economic assistance to folks who qualify for the tax breaks.

President Obama's first major piece of legislation, American Recovery and Reinvestment Act of 2009 that was popularly known as the stimulus bill, created the American Opportunity credit and made major changes to the EITC and Additional Child Tax Credit.

As tax watchers know, once lawmakers start fiddling with laws, they can't seem to stop. These refundable tax credits/changes in the stimulus bill were good through tax year 2010. They were extended through 2012 thanks to the Tax Relief and Job Creation Act of 2010.

Then as we were hanging on to the edge of the fiscal cliff, the American Taxpayer Relief Act of 2012 (enacted on Jan. 3, 2013) extended the credits for five more years, through 2017.

The Earned Income Tax Credit was expanded to make it easier for more families to claim it. The category for families with three or more children was created. The EITC phase-out also was increased for jointly-filing married couples in order to ease the marriage penalty.

The Additional Child Tax Credit saw a change in the minimum amount of earned income that qualifies a taxpayer for this refundable credit. The change not only increased the number of taxpayers who could claim it, but also bumped up the amount they could receive.

The American Opportunity Tax Credit, although in effect through 2017, still is a temporary replacement of the Hope credit. The big change here was a larger credit amount (up to $2,500), with a portion of the credit refundable for some taxpayers.

Another refundable tax credit, the Premium Tax Credit, took effect this year. It covers some of the cost of buying health insurance via a government exchange. If you don't get advance payment of the credit to your insurer this year, you'll claim the insurance premium tax credit on your taxes that you'll file in 2015.

Growing costs of refundable credits: Refundable credits have come, gone and changed over the years. Various tax provisions that allowed individuals to get money back from the Internal Revenue Service have influenced decisions about whether to work, to purchase health insurance, to enroll in college, or even to adopt a child.

There's no doubt that many people, especially during the recent U.S. economic travails, have depended greatly on the help from these refundable credits.

But questions about whether from a wider perspective they are worthwhile continues.

In a study issued in January 2013, the Congressional Budget Office (CBO) looked, in part, at how various refundable tax credits affect:

As for the simplicity question, which is getting a lot of attention as part of (potential) tax reform, CBO analysts not surprisingly found that "tax preferences, especially those that, like refundable credits, are targeted toward specific populations, make it more difficult and more costly for taxpayers to compute their tax liabilities and for the IRS to administer the tax code."

Bottom line cost concerns: And there's no denying that from a budgetary perspective, refundable tax credits are costly. 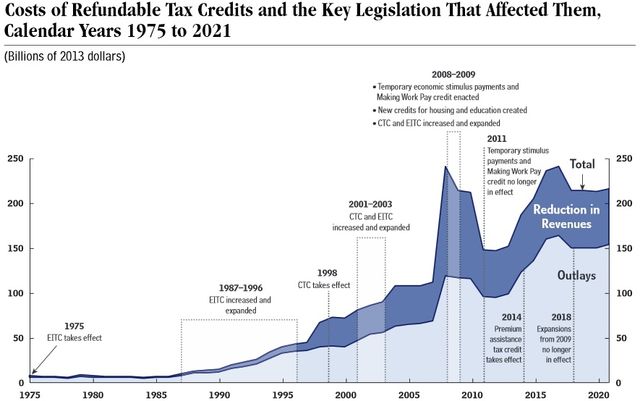 "Administering refundable tax credits also strains the limited resources the IRS has to provide services to taxpayers and to enforce the tax code. The number of tax returns increases as people who do not have to file returns do so in order to claim benefits. Complicated rules for refundable tax credits increase the number of telephone calls to the IRS from confused taxpayers and contribute to the tax gap (the difference between the amount of taxes that should be paid in a timely fashion and the amount that is actually paid). Some taxpayers probably make errors because they do not understand the tax law, whereas others — perhaps sensing that complexity makes the tax code more difficult to enforce — intentionally misreport their income, family characteristics, and other information on their tax returns."

But the CBO points out why refundable credits remain, for now, part of the tax code: "In certain respects, receiving benefits from the IRS is simpler for people than receiving them through other federal and state agencies, which means that eligible people may be more likely to seek such benefits."

When serious discussions about true tax reform finally begin, mostly like 2015 at the soonest, refundable credits must be a part of the talks.

Until then, if you're eligible for any of the refundable tax credits that will get you tax money back, claim them.

More tax talk: Refundable credits are one reason that some people don't owe income taxes. But in many cases, the tax circumstances that allow them to claim the credits change.

And as I wrote last week at my other tax blog, that means these non-taxpayers eventually will be joining the income taxpaying ranks. When that happens, they are likely to be paying taxes for a while, as discussed in the persistence of paying taxes.

Also over at Bankrate Taxes Blog I looked at Senate Finance Committee's consideration of commuter tax parity as part of the extenders bill. This would even up (again) the workplace benefits available to employees who drive to work and those who take mass transit.

My tax thoughts at Bankrate usually are posted each Tuesday and Thursday. Catch them there or look for a synopsis here the following weekend.