How are you spending your federal tax refund?

Just days before the April 15 filing deadline, the Internal Revenue Service reported that most taxpayers had already submitted their returns.

Of the almost 113 million returns the IRS had in its hands on April 11, more than 85 million resulted in refunds. 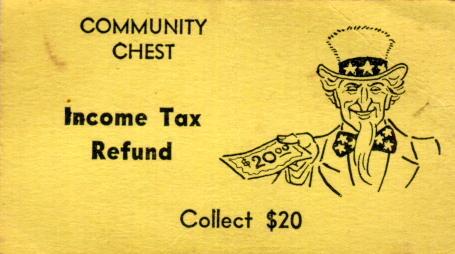 The latest federal tax refunds are a bit bigger than those received
by players of early Monopoly games.

Have your received your refund from Uncle Sam yet? If so, what did you do with it? If you're still waiting for your tax cash, what do you plan to do with it?

Recent surveys found that folks have a variety of uses for their federal refunds.

Taking care of cars: A survey commissioned by eBay Motors found that nationwide more than one-third (34 percent) of drivers plan to use part of their refunds on repairs to their vehicles from damage caused by this harsh winter's weather-ravaged roads.

Another 32 percent are investing in parts or accessories (tires, batteries, brakes) to better equip their vehicle to handle rough winter road conditions.

Microbusiness refund plans: The Sam's Club-Gallup Microbusiness Tracker found that many owners of microbusinesses, those with five or fewer employees, are looking at tax refunds this year as payback.

The survey found that two-thirds of microbusiness owners are choosing not to re-invest their tax refunds into their businesses. Instead, they plan to use the tax cash toward loan repayment or spend it on themselves.

That's not that surprising when you look at another stat from that survey. More than 60 percent of microbusiness owners have financed their business from personal savings.

So I totally understand how they view getting some bucks back from the feds as a deserved purely personal reward.

Savings also make the refund cut: Of the 1,500 respondents to a recent GOBankingRates survey, a whopping 68.7 percent said they plan to save at least some of their tax refund.

That's a pretty impressive percentage of savers, especially since interest rates on savings options are so low right now.

Do any of these refund usage options appeal to you?

Maybe you're thinking of other ways to put the tax cash to work, such as saving it for emergencies, retirement, educational costs or a house down payment. Or spending it on necessary items like your auto or home is more appealing. Or even paying off debt, credit card or other loans, is a good idea for your situation.

Or you can always spend it on yourself and/or friends and family.

Let us know in the comments section how you plan to spend your tax cash.

One day I hope to get a tax refund from the U.S. Treasury. When that does happen, I'll let definitely share my plans for the money.