Got debts? They could eat into your tax refund 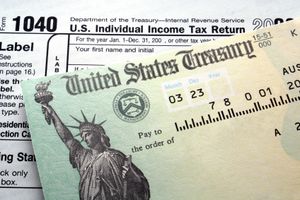 Your federal income tax refund finally arrived and it was less than you expected. What's the deal?

It could be debts you owe.

The U.S. Treasury, which is boss to the Internal Revenue Service, is able to nab part or all of your refund to pay some outstanding federal or state debts you have.

This ability comes thanks to the Treasury Offset Program, or TOP, which is run by the Bureau of Fiscal Service, or BFS.

Debts that are collected this way typically include past-due child support, unpaid student loan amounts and due state income tax.

Since 2010, TOP also has been collecting certain unemployment compensation debts owed to a state. These generally are debts for compensation that was fraudulently paid or for contributions owing to a state fund that were not paid due to fraud.

Between fiscal years 1996 and 2011, the BFS says it collected more than $51 billion via the offset program. Most of that TOP amount, more than $24 billion, came from delinquent child support. Another $18 billion was collected in federal non-tax debts, such as student loans, and $2.8 billion in state income tax debts.

Look for the notice: If you're surprised by your smaller IRS refund amount, it's probably because you overlooked the notice alerting you that the BFS took part of your federal tax refund to pay what you owe.

The notice will list the original refund and offset amounts. It will also include the agency that received the offset payment and its contact information.

If you believe you don't owe the debt or you want to dispute it, don't contact the BFS or IRS. They are just the collection agents. You need to go to the debtor, the agency that received the TOP payment.

Joint filer considerations: Your spouse missed her child support payments for her kids from a previous relationship and you don't think you should suffer a refund loss because of it. The IRS might agree.

If you filed a joint tax return, you may be entitled to part or all of the refund that was reduced by the offset. This could be the case if where your spouse is solely responsible for the debt.

To request your part of the refund, file Form 8379, Injured Spouse Allocation, with the IRS. You may file Form 8379 with your original joint tax return, with your amended joint tax return or by itself after you are notified of an offset. Details on filing for a portion of a refund reduced by a husband's or wife's debt are found in the form's instructions.

Other reasons for a wrong refund: This week's Weekly Tax Tip -- yes, as promised it was posted on Wednesday, April 23, just late in the day to the tip area at the upper right column; you can get it directly by signing up for the tip newsletter -- looks at the many reasons for and what to do about a wrong tax refund.

In addition to offset issues, your refund discrepancy could be because of math errors in figuring your tax bill, incorrect credit or deduction claims or improperly credited estimated tax payments.

The IRS should notify you of why it issued a different amount. If you disagree with its reasons, make sure you have the documentation to show why your expected refund amount is correct.