Just when you thought tax season couldn't get any crazier, computer problems are plaguing the U.S. and Canadian tax agencies. 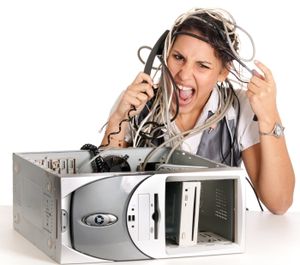 Let's start below the 49th parallel because as much as I love our neighbor to the north and my Canadian readers, I focus on U.S. taxes and our tax deadline is next week.

The Internal Revenue Service is in the same predicament as many computer owners, both individuals and businesses. It still has machines running the Windows XP operating system.

The 12½-year-old computer operating system is now officially dead. Sure, it's still on machines, but Microsoft ended free support and security updates for XP on April 8.

Despite the end of XP being planned for years, a lot of companies and governments worldwide are still using the system under paid support agreements while they transition to Windows 7.

The IRS is among those in this extended transfer position.

Money problems slow switchover: During a hearing on the IRS budget this week (Monday, April 7), House members wanted the IRS commissioner to explain why the agency was still using XP.

Rep. Ander Crenshaw (R. - Fla.), chairman of the House Appropriation Committee's subcommittee on financial services and general government, questioned the agency chief as to why the IRS had not prioritized the computer system move.

IRS Commissioner John Koskinen told the panel that the move from XP to Windows 7 was just one of nearly $300 million dollars' worth of information technology projects that has not been completed due to -- wait for it -- funding shortfalls.

And the situation didn't sit well with Koskinen either.

"We are very concerned that if we don't complete that work, we're going to have an unstable environment in terms of security," he said.

Extended coverage in place: But don't worry taxpayers. The IRS' XP system will be as safe as it ever was thanks to an extended support agreement under which Microsoft will provide access security updates for a year.

The hope is that by the time that expires, all IRS computers will be on the new operating system.

And, according to a Washington Post report, the operating system shift won't affect IRS' ability to process returns.

In a statement to the newspaper, the agency said "none of our filing season systems or other major business operating systems for taxpayers uses Windows XP."

Canada Revenue shut down access to its online tax services because of the potentially disastrous Heartbleed bug.

This Internet bug is being called catastrophic by many online security experts. It exposes a very large percentage of Internet users' encrypted communications stored on servers, making the data owners' info susceptible to attack and potential identity theft.

Even worse, Heartbleed leaves no trace so there's no definitive way to know how widespread the security breach is.

Out of an abundance of caution, Canada Revenue closed online services late Tuesday, April 8, evening and issued posted the notice below on its website this morning. 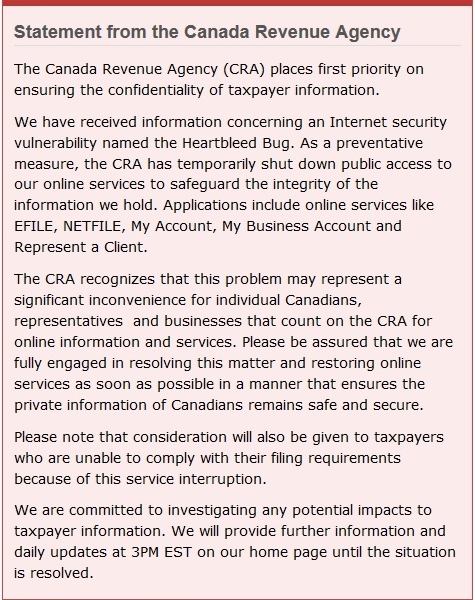 The good news is that Canada's tax-filing deadline is 15 days later than the one here in the U.S. So tax techies have more time to get things fixed before April 30.

The better news is that they won't need that much of it. In today's website update, Canada Revenue said, "We are currently working on a remedy for restoring online services and, at this time, anticipate that services will resume over the weekend." The agency is providing online updates each day at 3 p.m. Eastern time on its progress.

The best news is that Kerry-Lynne D. Findlay, Canada's Minister of National Revenue, is saying sorry in a perfect Canadian way. She has announced that individual taxpayers will not face any penalties that were the result of the agency's service interruption.

No U.S. heartbreak over Heartbleed: Popping down south of the 49th parallel again, what about the IRS? Is Heartbleed a problem for U.S. taxpayers?

The IRS says no. A statement on IRS.gov says:

The IRS continues to accept tax returns as normal. Our systems continue operating and are not affected by this bug, and we are not aware of any security vulnerabilities related to this situation. We continue to monitor the situation and remain in contact with our software partners. The IRS advises taxpayers to continue filing their tax returns as they normally would in advance of the April 15 deadline.