More smuggled smokes because of high state taxes...or not

Sin taxes are problematic. If they work as many advocates hope, people will be priced out of their bad habits, but federal and state treasuries take a hit.

Even worse, in some cases they could cause some jurisdictions to spend more public funds as they deal with one of the common consequences of sin taxes. The taxes tend to provoke illegal activity.

That's the key finding, again, of a recent analysis of cigarette excise taxes.

Higher taxes, more smugglers: As state and local governments continue to increase cigarette and other tobacco excise taxes to raise revenue, smugglers continue to profit from their illicit trafficking, according to the Mackinac Center for Public Policy, a nonprofit free market think tank.

Mackinac researchers in Midland, Mich., estimate that 27.6 percent of all cigarettes consumed in their home state in 2012 were smuggled across the state line.

New York tops the list of most-smuggled smokes, with 56.9 percent of cigarettes sold two years ago in the Empire State being illegal and untaxed.

Also crossing the 50 percent of sales mark was Arizona, with 51.5 percent of smokes sold there smuggled into that Southwestern state.

The Tax Foundation, another tax-adverse nonprofit that's based in Washington, D.C., put the Mackinac numbers into a map. 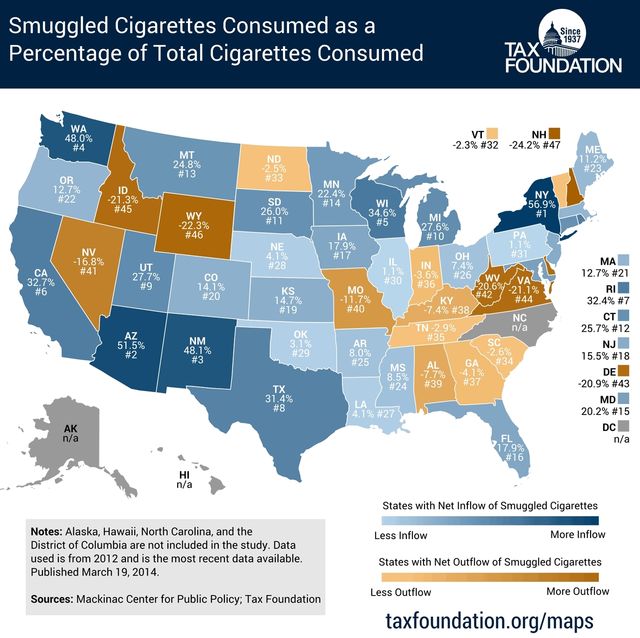 Click image for the Tax Foundation's take on Mackinac's findings.

Opponents of sin taxes are quick to point out that New York's state excise tax of $4.35 per pack is the highest in the nation. New York City adds an additional $1.50 per pack cigarette tax.

Are those taxes the reason for the high rate of smuggled New York cigarette sales? Probably in part.

Numbers across the board: Arizona's excise tax rate is $2, tied for 12th in the nation, yet it came in second in the Mackinac study. Are Arizonans that much more cost conscious that they go shopping for illegal cigarettes to save a few cents?

And Arizona's neighbor New Mexico was third in the Mackinac rankings, but only 21st in tax rates at $1.66 per pack.

Maybe there's something else going on in these Southwestern states beyond taxes -- a preference for a relatively easily, albeit surreptitiously, obtained Mexican brand, perhaps -- that is driving illegal sales there.

The sin tax/smuggling connection, however, seems stronger in Washington State, which collects $3.025 tax per pack, fifth highest in the nation and fourth on the Mackinac list.

Wisconsin's 2.52 excise tax per pack, 10 highest in the United State, earned it fifth place on the smuggled smokes sales list.

But why isn't Massachusetts, which has the second highest cigarette excise tax rate in the United States at $3.51 per pack, higher than 21st in the Mackinac ranking?

The key question is what can we say from these cigarette tax and smuggling pairings? Not much.

While taxes no doubt play some part in both smuggled cigarette sales and, as the sin tax advocates argue, the drop in smoking nationwide, the levies aren't the only reason for either trend.

But don't expect either side to give up their efforts to end or increase the taxes.

Lower-earners paying more: One thing is certain, the added excise tax costs tend to hurt lower-income smokers the most.

And, according to a story in today's New York Times, those are exactly the folks who are the biggest smokers.

Citing a Population Health Metrics study, the Times says that affluent U.S. counties have seen the biggest declines in smoking rates, while progress in the poorest ones has stagnated.

"Smoking is leaving these fancy places, these big urban areas," researcher Ali H. Mokdad told the newspaper. "But it has remained in these poor and rural areas. They are getting left behind."

You can check out how the prevalence of smoking has changed where you live in the interactive map the Times created to go with its story. 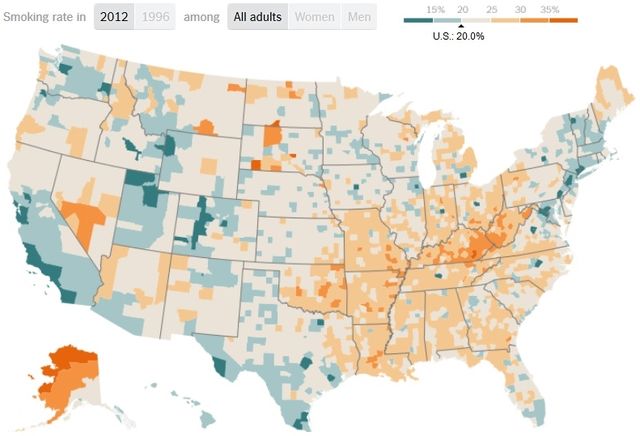 Click image to check out your state's smoking trends.

How about you? Are you a smoker? Are your neighbors? Would you buy illegal, but cheaper cigarettes?