No one is safe from identity theft, not even the United States' top law enforcement official.

While a lot of folks share the same name -- have you Googled yourself lately? -- an Eric Holder return listing income from a job at Wal-Mart no doubt raised some Internal Revenue Service eyebrows.

Another fraud red flag was that the ostensible U.S. Attorney General wanted his refund loaded onto a prepaid debit card.

The Atlanta U.S. Attorney's office said the refund claimed in their big boss' name was not paid.

Info on public websites: Instead, FBI and IRS Criminal Investigation agents arrested Yafait Tadesse and Eyaso Abebe. The pair was charged with carrying out a scheme from November 2012 through April 2013 to obtain the names and Social Security numbers of unsuspecting victims from various public websites and use this information on false tax returns that claimed fraudulent refunds.

I understand the birthday info. Lots of online bios, especially of public officials, share those dates.

But I really want to know which public website made Holder's and other individuals' Social Security numbers readily available? There are no details in the releases issued by the Federal Bureau of Investigation or Department of Justice.

"Identity thieves have figured out that if they can obtain your Social Security Number they can file false tax returns with the IRS," said Veronica Hyman-Pillot, IRS Special Agent in Charge IRS Criminal Investigation. "It does not matter your political position, economic status, or social standing, you are susceptible to identity theft. No one is immune."

The FBI says there is no indication that the attorney general was specifically targeted as a result of his position. He was just an unfortunate victim along with the rest of the identities stolen from private citizens across the country.

Pair pleads guilty: While the IRS stopped Holder's and several other false returns from being fully processed, other fraudulent refunds were directed onto prepaid debit cards. Investigators got surveillance videos showing Tadesse using one of the cards at stores in Carrollton, Ga.

This past Wednesday, March 12, the 21-year-old Tadesse of DeKalb County, Ga., was sentenced by United States District Judge Amy Totenberg to one year and one day in federal prison and three years of supervised release. Totenberg also ordered Tadesse to pay $4,014 in restitution to the IRS.

Abebe's sentencing is scheduled for Aug. 7.

"This investigation serves as a warning to those who conspire to devise schemes to defraud and steal money from hard-working citizens through embezzlement and identity theft," said FBI Atlanta Special Agent in Charge J. Britt Johnson.

"Regardless of whom the victims may be," said Johnson, "the FBI takes these violations very seriously and will continue to work with our federal law enforcement partners in investigating violations of income tax refund fraud."

Holder wants more data breach info: The sentencing of one of the men who stole Holder's identity in order to file a fake tax return comes just weeks after the AG called on Congress to pass a law that would require companies to notify the public about data breaches. 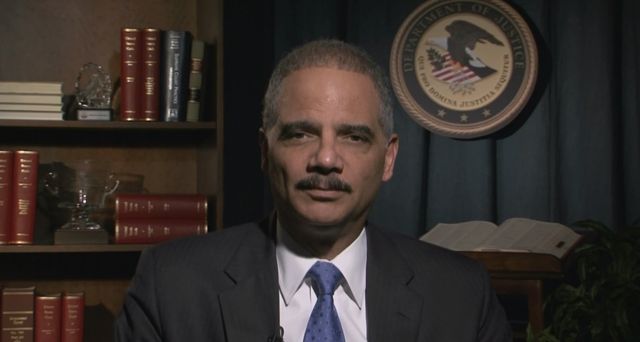 Holder's message to Congress was prompted by hackers who tapped into Target and Nieman Marcus computer systems, potentially putting more than 71 million customers' personal information at risk for identity theft.

So you apparently have to be AG for your identity thieves to be prosecuted... good to know since the IRS and every other agency gave me the complete run around. Not that I'm bitter or anything... =P