It's spring and young couples' fancy lightly turn to thoughts of love.

And if they're like the hubby and me, they're also thinking about baseball.

The 2014 Major League Baseball season technically started on Saturday, March 22, when the Los Angeles Dodgers and Arizona Diamondbacks faced off in Sydney, Australia. Yes, the first game of the season was outside the country. So was the second on March 23. The Dodgers took both games at Sydney Cricket Ground.

Then we had the 2014 U.S. opening night on Sunday, March 30, at Petco Park, where the San Diego Padres beat the Dodgers. Yes, the Boys in Blue have played three games before most other MLB teams have seen an official 2014 pitch.

And this afternoon, bats are in full swing as 26 teams are playing ball at 13 ballparks across the country.

One Opening Day celebration: Many years ago when there was only one Opening Day, the hubby and I would take the day off and head up the Baltimore-Washington Parkway to see the Orioles, first in Memorial Stadium and then in Camden Yards.

If we hadn't already been married, the excitement of the first day of baseball combined with the delight of playing hooky from work would have been enough to make me propose to him or accept his offer of marriage.

But even if that had happened, most of our fellow baseball fans wouldn't have shared the special moment. The O's are one of five MLB teams that don't allow scoreboard marriage proposals.

The others, according to Molly Fitzpatrick's story at Swimmingly, are the Toronto Blue Jays, Los Angeles/Anaheim Angels, Kansas City Royals and New York Mets. 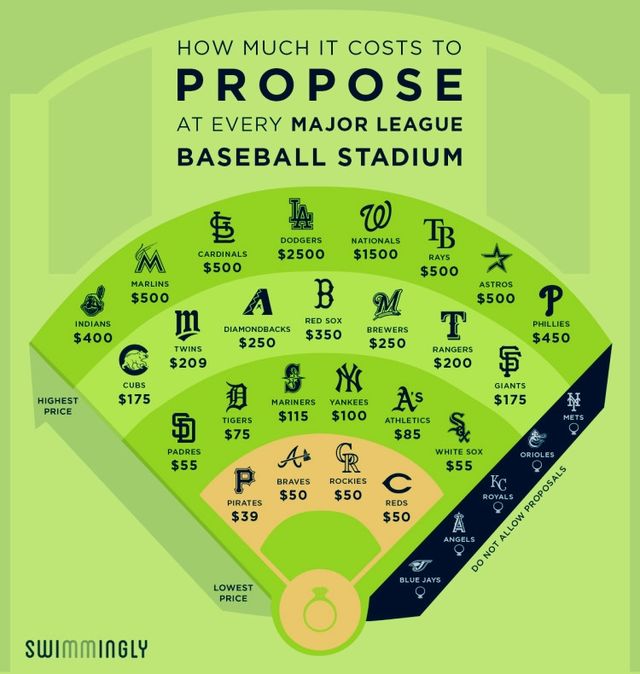 However, the other 25 teams will, for a sometimes sizable price, play a part in a couple's big moment.

Fitzpatrick has all the details in her story, but here are the least and most you can expect if you wish to ask your true love to spend his or her life with you.

For $38.50 at PNC Park, the Pittsburgh Pirates stadium staff will display your engagement message on the scoreboard.

The Dodgers' $2,500 engagement package will get your proposal featured live on Dodgers Stadium's video board.

I guess the Dodgers need every money-making option possible to cover the biggest payroll in MLB!

Tax tips for young marrieds: Once you get that "yes!" and tie the knot, remember that your taxes will change.

As I mentioned to Kathryn Tuggle when we talked for her story about 6 Things Newlyweds Need to Know About Their First Joint Tax Return, you are considered married for the full year if you are married on Dec. 31. That's the case even if Dec. 31 is the only day of the year you are married.

As a married couple, you also must decide whether to file a joint return or send in two 1040s as under the married filing separately status. Note that this designation for a married couple is not the same as when you each filed as single taxpayers.

The tax bracket is markedly different for married filing separately and there are several tax breaks that aren't allowed when you use this status.

This filing season, same-sex married couples also will file their federal taxes as married filing jointly or married filing separately regardless of what their state law is on gay/lesbian marriage.

No matter where your engagement is celebrated or when you are married, the hubby and I wish you as happy a married life as we've had for more than 32 years and counting.

And the Internal Revenue Service sends its marriage and tax congratulations, too.