I know you're concentrating on your 2013 tax return right now, but you also might want to check your files for your 2010 Form 1040. 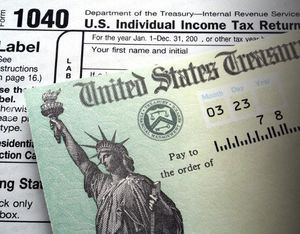 If you didn't file a return three years ago and were due a refund back then, time is running out to get your money.

And we're talking a lot of money. The Internal Revenue Service has almost $760 million in refunds that around 918,600 taxpayers didn't claim three years ago.

So the IRS, as it does about this time every year, is reminding those nonfilers that the only way to get their 2010 refund money is to file a return.

Tax law gives taxpayers just three years to file and get a refund that wasn't collected back in the original filing season that it was due. That means the ultra-extended filing deadline for a 2010 return that should have been sent to the IRS by April 15, 2011, is now April 15, 2014.

Don't worry. There's no penalty for missing the original filing deadline if you're due a refund.

Miss this deadline, lose your refund: But if you do miss this next April 15 due date, Uncle Sam gets to keep your 2010 refund money. Forever.

"The window is quickly closing for people who are owed refunds from 2010 who haven't filed a tax return," said IRS Commissioner John Koskinen in a statement announcing the unclaimed refunds. "We encourage students, part-time workers and others who haven't filed for 2010 to look into this before time runs out on April 15."

Koskinen's mention of students is particularly noteworthy. College kids often work some between classes. They also are among those who don't send in a 1040 because they had too little income to require that they file a tax return.

But if the students -- or anyone, such as the part-time employees the IRS commissioner also cited -- had taxes withheld from their wages, the only way to get that money is to file a tax return.

Unclaimed refunds, state by state: The IRS estimates that half the potential refunds for 2010 are more than $571.

And the refund money, as shown in the alphabetically arranged table below, is due individuals in every state and the District of Columbia.

The largest median check is $649 awaiting late-filing Alaskans. Wyoming is a close second, with a median individual refund amount of $648. And Washington comes in third, with a $640 median unclaimed check.

So download the 2010-2012 filing material -- it's available at the IRS prior years forms and publications page -- and get to work on not only this year's return, but also the overlooked earlier filings that could get you some extra money.

Just make sure you do so by April 15.