Why U.S. tax breaks make me a big fan of Canadian hockey

Good for the U.S. Olympic hockey club on its victory over Russia today. Anything that pisses off Vladimir Putin is OK by me.

But I'm still pulling for Canada to defend its gold medal. 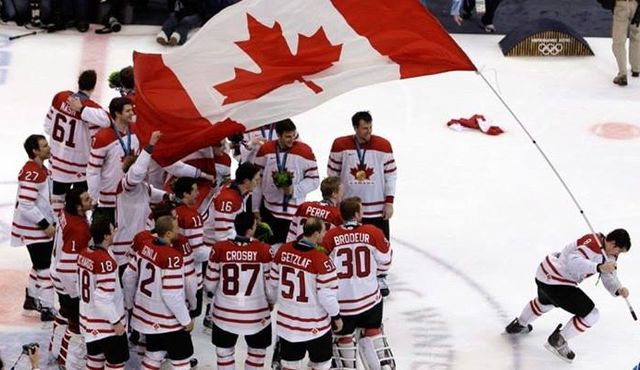 My unlikely hockey romance: I am a native Texan. In fact, I'm from a small town in the desert section of West Texas. While we had decent winters, ice never really was a part of my life.

I fell in love with the United States' northern neighbor when the hubby and I lived in the Washington, D.C. area. It happened when I saw my first hockey game in person.

The Washington Capitals were woeful when we first arrived in the nation's capital. But bad hockey meant great seats were available. And while our team back in the early '80s usually stank up the Capital Centre, the visiting clubs showed us what was possible on the ice.

I'm pleased to report that our commitment to the team was soon rewarded. Shortly after the hubby gave me (us) season tickets as a birthday gift, the Caps acquired Rod Langway, the first U.S.-born player to win (wearing the Caps' red, white and blue uniform) the NHL's award for best defenseman, and Brian Engblom. Those veteran defensemen helped a young Scott Stevens become a dominant force and made the team's play respectable and eventually competitive.

Just as you meet the parents of your spouse, I had to head to the birthplace of the game that had so captivated me. So the hubby and I took many trips north of the 49th parallel, taking in games in Montreal, Quebec City and Toronto.

We visited the Hockey Hall of Fame, both its warehouse type digs near Exhibition Place during an unusually hot summer and the new grand hall in an old bank building in downtown Toronto during a blizzard.

Discovering true love: And I came to appreciate how important hockey is to Canadians.

Sure, Americans love Olympic hockey because it's a chance to cheer U.S. athletes. And the Miracle on Ice was a great in-your-face moment during the cold war. Making it more special was that true amateurs, a bunch of college kids, beat the essentially professional U.S.S.R./Russian Army team.

Hey, I don't begrudge national fandom. I still have my VHS tapes of the Lake Placid games; remember, we had to beat Finland to take the 1980 gold.

But basically, we in the United States like winning more than the sport. When the Ws don't show up regularly, we abandon teams, hockey and otherwise, until the play gets better.

But hockey isn't just a game in Canada. It is Canada.

My hockey lessons: I learned the lesson of Canada and hockey by sitting in gold seats in Maple Leaf Gardens where there was no glass partition separating fans from players. There didn't need to be. There was tradition and respect.

I learned the importance of the game to a nation from fans sitting at the very top of the Quebec Nordiques' arena where chain-smoking faithful got a kick out of ribbing the unilingual American fans in French.

And I learned it by watching the pure, child-like joy on the faces of the players, most of whom were Canadians when I started following the game. 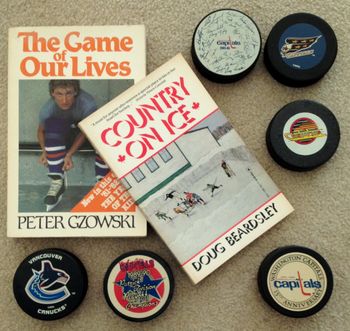 If you can't make it to a true hockey hotbed, a couple of books do a great job of putting into words the importance of hockey to Canada and its national identity. Check out The Game of Our Lives and Country on Ice.

Yes, the books (and pucks) pictured at left are from the sports section of our personal library.

Pure puck economics: Tom Van Riper nailed it with his observation that when it comes to hockey, there really is no place like Canada.

And the Forbes magazine staffer isn't just taking about the sport or its fans. His evaluation is of the economics of the game.

In his article for the Dec. 16, 2013 issue, Van Riper makes a good case for why the NHL's financial future is in Canada, not America.

And, yes, taxes are the main reason.

Major tax breaks for professional sports: Van Riper points out that professional hockey does quite well on its own in Canada, whereas here in the States, many NHL teams need tax breaks just to break even.

He uses as an example the recently repatriated Winnipeg Jets. That team was yanked out of Manitoba and plopped in Phoenix in 1996. The renamed Coyotes are still struggling in the U.S. Southwest, but Winnipeg got its NHL team back when the expansion Atlanta Thrashers acknowledged, for the second time, that the American South is not hockey country.

The Thrashers, which in 12 years qualified for the Stanley Cup playoffs only once and never won a playoff game, returned to the ice in Winnipeg with the 2011-12 NHL season, reclaiming the Jets moniker.

So far so good. Van Riper provides the data:

"While 12 of 30 National Hockey League teams operated at a loss or close to it during the 2012-13 season, according to Forbes estimates, the Jets are basking in a turnaround, thanks to a timely move from Atlanta to hockey-mad Winnipeg after a 15-year absence of the sport from the city. In the first year following the 2011 relocation Jets revenues shot up 48% to $105 million with operating profit of $13.3 million–despite relocating to a 700,000-person metro roughly one-eighth the size of Atlanta."

Taxpayer if not fans support: So why do struggling NHL teams stay put in almost empty U.S. arenas? Tax subsidies.

American taxpayers are more willing to prop up teams than their Canadian counterparts, says Van Riper.

Both Florida NHL clubs, the Miami-area Panthers and the Lightning of Tampa, enjoy sales-tax rebates of $2 million a year, money that goes back to the team rather than to the Sunshine State, writes Van Riper. Hockey remains in Phoenix only because the city of Glendale, Ariz., Phoenix's neighbor where the Coyotes play, agreed to cover up to $50 million in team operating losses.

"If American taxpayers were less interested in subsidizing NHL teams, there would be more teams in Canada," Tony Keller of the Toronto Globe & Mail told Van Riper.

Let hockey head home: C'mon America, give it up. Hockey is not, for the most part, our game. Dispensation is granted to the four U.S. teams in the Original Six.

But in reality, it is time for U.S. taxpayers to quit underwriting the whims of rich NHL owners and send hockey, at least on the professional level, back home to Canada where it is truly loved and belongs.