Paying taxes on Super Bowl (and other gambling) winnings

Unless you were a fan of the underdog Seattle Seahawks who backed up your cheering with a real wager, you probably didn't do so well in your betting pool.

Nevada casinos are expected to post a profit on Super Bowl XLVIII, the biggest annual betting event for the 21st time in 23 years since the state began officially tracking the game, according to the Las Vegas Sun.

The reason Silver State betting parlors are rolling in the dough today? Around two out of every three Nevada gamblers wagered on Denver all the way through Sunday's kickoff.

Those Broncos bettors lost their money after the Seahawks' 43-8 blowout victory.

And while that makes Nevada's sports books very happy, Uncle Sam is as bummed as all those who sported orange jerseys at the NFL championship game. The fewer, smaller payouts mean less taxes for him to collect.

Prop bet payouts: Sure, a few folks did win on the overall game bet. Others cashed in on one or more of the myriad prop bets.

And yes, someone did bet on the first score of the game being a Seattle safety. 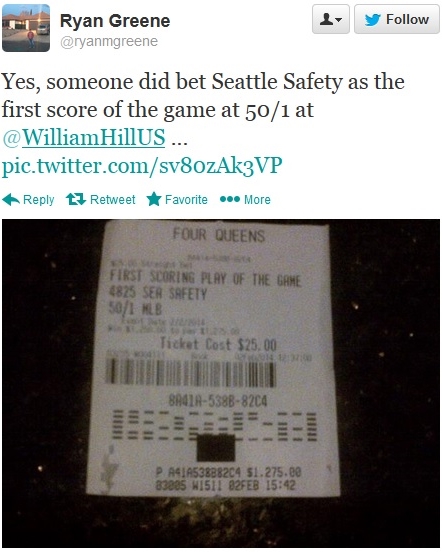 UPDATE: Just discovered another, and higher paying, safety prop bet. TMZ Sports reports that Jona Rechnitz won $25,000 on a $500 bet that the first scoring play of this year's NFL championship game would be a safety for Seattle. Rechnitz won $50,000 on a similar safety bet in Super Bowl XLVI.

But for the most part, this year's Super Bowl was not good to gamblers.

Report your winnings: If, however, you were one of the lucky Super Bowl bet winners, today's Daily Tax Tip reminds you that you'll need to report your gambling winnings on your 2014 tax return next year.

The specifics on such tax filings also is covered in the slide show (#8) I put together for Bankrate, which looks not only at how to handle taxes on winning bets, but also the many gambling opportunities afforded by sports.

As a special federal commission determined nearly 40 years ago, "No matter what is said or done by advocates or opponents of gambling in all its various forms, it is an activity that is practiced, or tacitly endorsed, by a substantial majority of Americans."

And the various sports competitions that go on almost every day are Americans' prime gambling vehicles.

Get ready, bettors. March Madness is just around the corner!