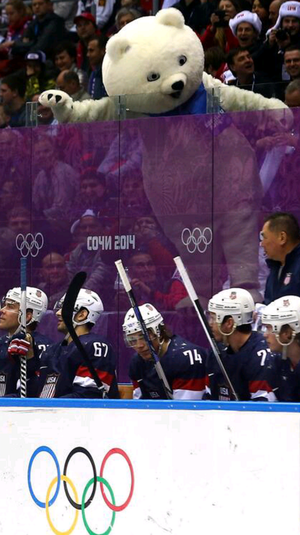 Well, at least the U.S. men's Olympic hockey team members won't have to worry about paying tax on their Sochi efforts. They were shut out earlier today, both in their final game against Finland's team and the medals.

If you've been focusing on the Winter Olympics' events more than tax proposals, you might have missed the proposal by some U.S. Representatives to keep the Internal Revenue Service out of the victory celebrations by U.S. Olympians.

The Tax Exemptions for American Medalists Act, also known as the TEAM Act, would exempt the value of any Olympics medal or any prize money paid by the U.S. Olympic Committee for such medals -- $25,000 for gold, $15,000 for silver and $10,000 for bronze -- from taxes.

The measure is identical to bills proposed during the Summer Olympics in 2012 from London.

As I noted at Bankrate Taxes Blog, this current bill is likely to face the same fate as the one introduced two years ago. When the focus on the games and the winners fades, so will the proposal.

State effort, too: But an Illinois state legislator hopes to offer her state's Olympians a break from taxes at that level.

Sen. Julie Morrison, a Democrat from the Chicago suburb of Deerfield, has sponsored legislation that would offer Illinois Olympians some relief from the state's 5 percent flat income tax.

S.B. 344, as amended, would create a state tax deduction in an amount equal to the value of any medal awarded in, or any prize money received from the United States Olympic Committee on account of, competition in the Olympic Games. It also would apply to Paralympics winners.

"Olympic athletes proudly represent our state and country," Morrison said. "We should honor them for their commitment. Exempting Illinois' taxes on their prizes is one small way to show our appreciation."

Four Illinois residents have won so far at Sochi. Megan Bozek of Buffalo Grove and Kendall Coyne of Palos Heights are part of the women's hockey team that won a silver medal. Jason Brown of Highland Park earned a bronze medal as part of the U.S. figure skating team. Aja Evans of Chicago took bronze in women's bobsledding.

Morrison's bill was approved last week by a state Senate committee.In the past, Illinois has exempted Olympians from paying taxes on their awards.

More tax musings: In addition to looking at the politcal and tax connections to Olympic medals, I also examined last week at my other tax blog the frustrating error code that some early federal filers are receiving when they check on the status of they tax refunds.

My tax thoughts for Bankrate are usually posted at that personal finance site each Tuesday and Thursday. If you happen to miss them then and there, check here on the weekend for a synopsis and links.