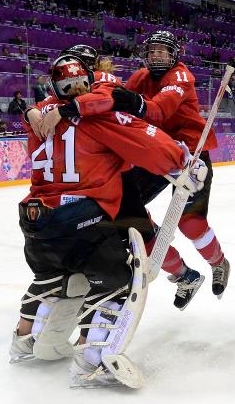 The Swiss women's Olympic hockey team took home a bronze medal today, but in the eyes of the Internal Revenue Service, that country is the gold standard for offshore accounts.

For years, the IRS has been encouraging U.S. taxpayers who have foreign accounts to 'fess up about where they keep their money.

The Offshore Voluntary Disclosure Program, or OVDP, and related efforts offer incentives for taxpayers to disclose their offshore accounts. As long as they pay their delinquent taxes, interest and slightly reduced penalties, they won't face criminal prosecution.

They IRS doesn't like the term tax amnesty, but that's essentially what it is.

Whatever you call it, it works.

The 2009 OVDP and similar Offshore Voluntary Disclosure Initiative, or OVDI, in 2011, were so successful -- almost $4.5 billion was collected -- that the IRS began an open-ended offshore account disclosure program in January 2012. So far, around another billion has been brought into the U.S. Treasury from foreign accounts.

So which international holdings have contributed the most to Uncle Sam's coffers? Swiss accounts.

A recent Government Accountability Office (GAO) report found that as part of the IRS' 2009 OVDP, there were 12,889 filings of Report of Foreign Bank and Financial Account forms, or FBARs.

And most of those filings revealed accounts in Switzerland. The specific numbers: 5,427 Swiss accounts, representing 42 percent of the 2009 OVDP FBAR revelations.

From a tax standpoint, that's a really BFD! 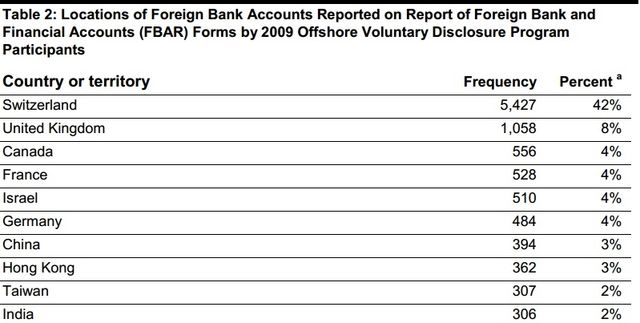 The next largest group of FBARs -- 1,058 or 8 percent -- listed accounts in the United Kingdom.

Four countries -- Canada, France, Israel and Germany -- were home each to 4 percent of the holdings revealed during the first OVDP.

Accounts in more easterly-situated financial institutions were reported in China and Hong Kong, with 3 percent each of 2009's FBAR filings, and Taiwan and India, with 2 percent of reported foreign holdings.

Beginning with UBS: In the spirit of full disclosure (pun fully intended!), secret Swiss bank accounts were the IRS' prime target back in 2009. So the GAO report isn't that surprising.

You might remember that back then the big tax question was what did execs of UBS, the largest bank in Switzerland, know and when? Turns out, quite a lot.

Swiss bankers and officials were not happy with the attention to the Alpine nation's vaunted financial privacy/secrecy standards. They cried foul and complained of U.S. bullying.

The Senate Permanent Subcommittee on Investigations, a part of the Senate Homeland Security & Governmental Affairs Committee (try saying that in one breath!), is holding a hearing Wednesday, Feb. 26, into what's hapening with the crackdown on offshore tax evasion.

The hearing, according to the subcommittee's website announcement, will focus on "the status of efforts to hold Swiss banks and their U.S. clients accountable for unpaid taxes on billions of dollars in hidden assets."

The official witness list won't be available until Monday, Feb. 24, but the subcommittee promises that we'll hear from "representatives from a Swiss bank and the U.S. Department of Justice."