Guns and taxes are two hot-button issues, regardless of whether you're pro both, con both or split in your support of the two. 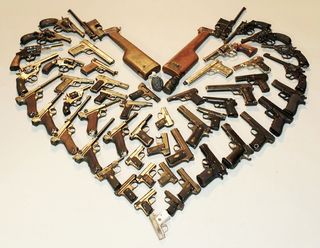 And they converge or collide more often than you might think.

There are the Second Amendment sales tax holidays, like the one held last September in Louisiana.

There are the various proposals at federal and state levels to tax firearms and/or ammunition.

There are the crazy tax protestors who use weapons against tax collectors.

And there are the guns that the Internal Revenue Service's Criminal Investigation Division has so those agents can literally combat violent tax opponents.

Now come two more circumstances, one in Connecticut and the other in Florida but both tying taxes to gun safety, to add to this particularly American tax and weapons list.

Walmart's gun safety tax error: Connecticut, the site of the horrific Sandy Hook Elementary shooting in December 2012 that left 20 children and six school staff dead, has had a gun safety tax break on its books for almost 15 years.

Specifically, Conn. Gen. Stat. §12-412(101) says that there is no state tax on the sales of and the storage, use or other consumption of firearm safety devices. This includes safes, lock boxes, trigger and barrel locks and other items designed to enhance home firearm safety.

So tax savvy Sean Witoshynsky was surprised when he the Walmart on Newtown Road in Danbury charged him more than $33 in Connecticut sales tax on his purchase of a $500 gun safe.

He pointed out the law to the store clerk, he told NewsTimes.com, but was charged the tax anyway.

The Hearst Connecticut Media newspaper's report of Witoshynsky's wrong tax and its subsequent follow-up at other Walmarts in the state that were erroneously collecting sales tax on firearms safety items has prompted changes at the retail giant.

Walmart issued a statement that it is "sending out an internal note to our associates explaining that gun safes are exempt from sales tax in Connecticut and other states that have similar laws."

That, however, hasn't stopped some state officials from demanding more.

"If Walmart is charging a sales tax on these safety devices, it is breaking the law and violating the spirit and intent of a measure intended to protect people, their families and the community," Blumenthal said. "Appropriate remedies should be levied, including penalties."

Tax office as Florida gun access point: Meanwhile, at the southern end of the Eastern Seaboard, Florida officials think tax offices could help more residents there get their hands on guns.

The Florida Senate's Agriculture Committee has unanimously approved a measure that would let gun owners apply for concealed weapons licenses at their local tax collector's.

The proposal, supported by the National Rifle Association, is designed to help the state deal with the growing interest by Sunshine State residents in carrying concealed firearms.

State officials say that more than a million concealed weapons licenses have been issued, but the Department of Agriculture and Consumer Services' eight regional field offices cannot keep up with the demand. The backlog is so bad, reports the Fort Myers NewsPress.com, that gun owners are waiting up to six months in some locales to get a license appointment.

To obtain a license, the gun owners must undergo some training. That requirement, say concealed weapon advocates, will make Florida safer.

Florida's tax office gun licensing proposal would allow tax collectors to charge an extra $22 on top of the $70 fee for new applications and an additional $12 for renewals, which current cost $60. The additional $42 for background checks of applicants will still be handled by the Agriculture Department.