If you didn't rush to file your federal tax return when the 2014 filing season finally opened on Jan. 31, chances are you itemize your deductions. 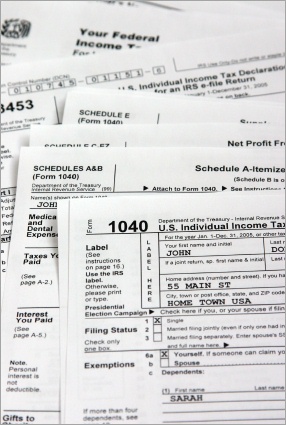 True, some early season filers have more complicated tax returns involving Schedule A and lots of other forms. And these folks get tax refunds, too, which is a prime motivator for the first wave of 1040s sent to the Internal Revenue Service.

But a lot of us itemizers -- yes, I'm one and I do tend to file closer to the April 15 deadline -- are still waiting on some of the tax documents we need to complete our returns.

Of course, if and when our tax life becomes less complex, we certainly can start claiming the standard deduction.

As today's Daily Tax Tip notes, you make the decision to use the standard or itemized deduction every year. If the standard one was better last year, but this year you'll get a better filing result by filling out a Schedule A, then by all means itemize.

For 2014 tax planning, the standard deduction goes up a bit to $6,200 for singles and married persons filing separately; $9,100 for heads of households; and $12,400 for married couples filing joint returns.

The bottom deduction line is always pick the method that helps you get the lowest possible tax bill.

Itemized deductions state-by-state: Pew Charitable Trusts looked at filing data for the 2011, the year for which the most recent state data is available, and found that taxpayers nationwide claimed about $1.3 trillion in itemized deductions.

On average, almost a third (32.1 percent) of U.S. taxpayers itemized. The average amount claimed on Schedule A across the country was $26,706.

National numbers are all fine and good, but most of the time what we really want is detail on where we live. No problem.

Pew put the information into a nifty interactive map that lets you check out each state's itemized deduction data. 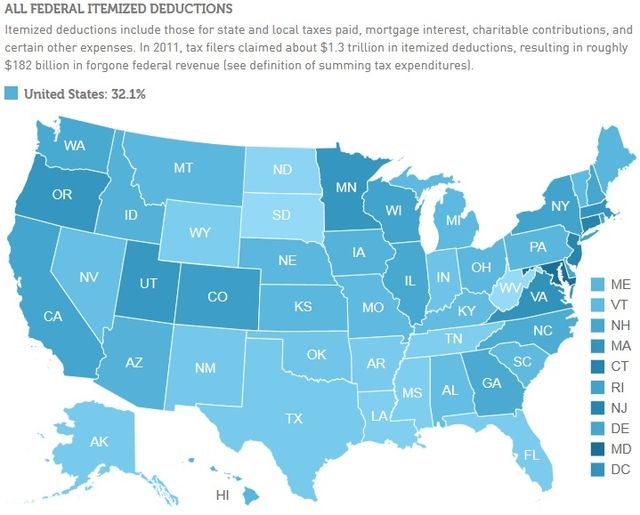 How does your state compare? One of my former stomping grounds, Maryland, led the country in 2011 in the number of residents who totaled their medical costs, state and local taxes paid, mortgage interest, charitable contributions and certain other expenses.

Almost half, 47.9 percent of Old Line State residents went to that filing trouble. The average itemized deduction amount for Marylanders was, according to Pew, $27,940.

From Maryland, the hubby and I headed to Florida, where in 2011 just more than a quarter (24.3 percent) of Sunshine State taxpayers claimed an average of $25,274 on their Schedule A forms.

Now we're back in Texas, where in 2011 we were part of the 24.7 percent of Lone Star State residents who filed a Schedule A. The average itemized claim amount that year in Tejas was $24,735.

As all y'all tax geeks know by now, the states where residents tend to itemize are those with higher state taxes, like Maryland.

States with fewer and lower taxes didn't have as many folks sending in Schedule A with their 1040 form. The states with the lowest itemized deduction claimants included North Dakota at 21 percent, South Dakota at 19.4 percent and West Virginia with 18.8 percent.

Do you claim the standard deduction or itemize? Why? Do you use the same deduction method every year? If you itemize, how does your itemized deduction amount compare to your state's 2011 average Schedule A claim?