Congress loves acronyms. I swear I think some bills are named by coming up with the initial based moniker first and then working backward to get a relatively reasonable name for the legislation.

Recently we had the TEAM Act (Tax Exemptions for American Medalists Act) dealing with Olympians' taxes. And a few years ago we got the HAPPY Act (Humanity and Pets Partnered Through the Years) that wanted to make pets' medical costs tax deductible.

But here's an acronym that no bill sponsor wants attached to a measure: DOA. 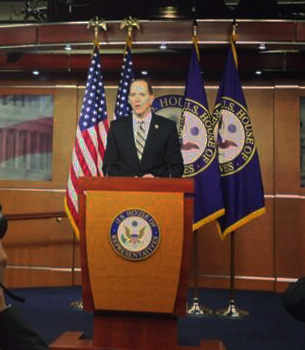 That, however, is the assessment of the chances for action, at least this year, on Ways and Means Chairman Dave Camp's long-awaited tax reform proposal.

Camp released his plan this afternoon.

It's big. It's bold. But first, I ask for your patience as I digress a bit into tax wonkian policy talk as to why for the most part it also is an exercise in futility.

Fading tax reform fires: Camp, a Republican representative from Michigan, has been championing tax reform since he took over as head of the House tax-writing panel. Last year, he and Democratic Sen. Max Baucus of Montana, the chair of the Senate Finance Committee, hit the road trying to gin up ideas and enthusiasm for revamping the reviled tax code.

The Max and Dave show had minimal success and now it looks like tax reform has been relegated to the legislative back burner.

There are for several reasons.

First, Camp recently lost his bipartisan buddy. No, not that! Baucus is doing quite well, thank you. He simply left the Senate to become Ambassador to China.

Although Sen. Ron Wyden (D-Ore.), who took over as Finance chair, has put forth his own tax reform proposals in the past, he's said he first wants to focus on the expired tax breaks known as extenders.

Then we have the time and cost factors.

Next week is March. Really, we're about to head into the third month of the year. We all know how long it takes Congress to do anything. Ten months is an impossible time frame the way these folks work ... or don't.

Show me the tax money: As for the money, and it's always about the money, Camp's proposal would mean a loss for the U.S. Treasury of around $5 trillion over 10 years, according to Joint Committee on Taxation calculations.

Camp says his proposal is revenue neutral; that means he's come up with ways to replace that $5 trillion.

The devil is, of course, in the details. You can bet that there will be opposition from folks affected by or representing individuals and industries in the revenue offset areas.

In exchange for lower tax rates (just three income brackets taxed at 10, 25 and 35 percent) and an easier tax system, Camp suggests ending some tax breaks that most of us have claimed our entire filing lives.

Comfortable and somewhat cherished deductions: Hmmm. Give us a minute. Sure, everyone always says they want a simpler tax code, but there's something about seeing special items each year on the 1040 that help us lop off some of what we owe Uncle Sam.

Camp would do away with many of those. We wouldn't have personal exemptions for ourselves and all our dependent family members. Parents would no longer get any tax-related child care help.

And those state and local taxes that most Americans pay and many deduct would be a tax filing thing of the past.

As for the big one, the tax break tie to the so-called American Dream of homeownership, Camp would reduce that, too.

The mortgage interest deduction, now available for home loans of up to $1 million, could be claimed only on mortgages of less than $500,000. Granted, that wouldn't affect most homeowners, but I can already hear the cries of "slippery slope" from Realtors and home builders.

Political pitfalls and potholes: Finally, there are the politics, both adversarial between the two major parties and within the Republican Party itself.

That's where we get into the DOA tag.

In advance of Camp's release of his tax plan, Senate Minority Leader Mitch McConnell of Kentucky said the proposal has no chance.

McConnell, who's locked in a Republican primary fight with a Tea Party candidate and if he wins will face a tough Democratic challenge in the general election, tried to lay the blame at the Democrats' doorstep.

"The majority leader and the president have said they want $1 trillion in new revenue for the federal government as a condition for doing comprehensive tax reform, which we know we ought to do," McConnell said on Tuesday. "So I have no hope for that happening this year."

Election issue focus: He and other GOP leaders, both on the Hill and in campaign offices, want to focus on issues that will help them solidify their House majority and possibly take control of the Senate.

That means pounding President Obama and Democrats on health care. And whacking the Internal Revenue Service for its many recent missteps. And shoring up the base on traditional conservative issues like marriage and abortion.

There's no need right now, they say, to wander off on a tedious and time-consuming issue, even one that everyone agrees needs to be dealt with eventually, like major tax reform.

The GOP's political mindset is that its members can deal with such tax changes when they have control of both Congressional chambers and perhaps the White House, too.

But kudos to him for keeping up the good fight. At least it's a start, even if it is one that will continue in fits and starts.

You can check out Camp's overview of his Tax Reform Act of 2014, as well as the 194-page breakout of the sections. I know what I'll be reading tonight!