Court rulings open door for Southern accented same-sex 'I do'

I now pronounce y'all husband and husband. Or wife and wife. 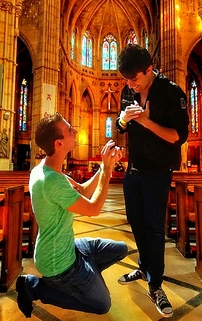 The key word in those declarations is not the same-sex spouses. It's y'all.

Yep, it looks like same-sex marriage is coming to the South, the region most resistant to this continuing cultural shift.

Courts in Kentucky and Virginia this week handed down rulings declaring unconstitutional their states' prohibitions of gay and lesbian marriages or refusal to recognize such vows legally exchanged elsewhere.

The decisions are great Valentine's Day gifts for couples looking to take the next legal step in their relationships.

But actual vows won't be exchanged in either state for a while. Both cases are expected to be appealed, probably all the way to the U.S. Supreme Court.

That law, wrote Judge Arenda L. Wright Allen of the United States District Court for the Eastern District of Virginia in Norfolk, denies individuals of their U.S. Constitution Fourth Amendment rights to due process and equal protection.

"Our Constitution declares that 'all men' are created equal," wrote Allen in her 41-page ruling issued late Thursday, Feb. 13. "Surely this means all of us."

The court decision comes on the heels of the announcement by Virginia's newly elected Democratic state officials that they would not defend the state in federal lawsuits challenging the same-sex marriage ban.

Four gay and lesbian couples filed the federal lawsuit to force Kentucky to recognize their out-of-state marriages. Heyburn agreed with the couples that their constitutional rights were being denied by the state's refusal to officially acknowledge their legal vows.

The ruling, however, did not address whether Kentucky must issue marriage licenses to same-sex couples. That issue was not raised in this case, but Heyburn noted that the 2013 U.S. Supreme Court ruling that struck down a key part of the Defense of Marriage Act, or DOMA, and his own ruling "suggest a possible result to that question."

While Heyburn's decision relied heavily on the DOMA case, he also cited a series of court cases going back to the legalization of mixed-race marriages and mentioned recent same-sex marriage decisions in nine other states.

And Heyburn offered both a legal history lesson and a prediction in wrapping up his order:

So, as one can readily see, judicial thinking on this issue has evolved ever so slowly. That is because courts usually answer only the questions that come before it. Judge Oliver Wendell Holmes aptly described this process: "[J]udges do and must legislate, but they can do so only interstitially; they are confined from molar to molecular motions." ... [T]he Supreme Court has moved interstitially, as Holmes said it should, establishing the framework of cases from which district judges now draw wisdom and inspiration. Each of these small steps has led to this place and this time, where the right of same-sex spouses to the state-conferred benefits of marriage is virtually compelled.

That's a little too long to make it onto a Valentine's Day card, but Heyburn's words still are a very nice sentiment for all lovers.