Could a flatulence tax on cows slow climate change?

If recent winter storms left you stuck on an icy road or without power, you can quit cursing Mother Nature, highway departments and power companies. 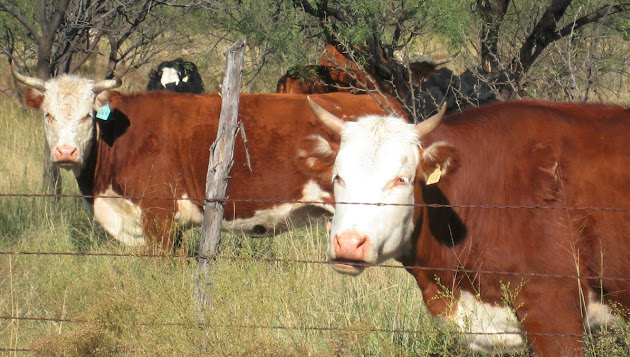 Most scientists say a major contributor to climate change, which covers not only global warming events like Australia's recent hot spell, but all types of extreme weather worldwide, is carbon dioxide (CO2) emissions.

But a group of international researchers say we also need to pay more attention to other greenhouse gases associated with livestock.

In the opinion commentary "Ruminants, Climate Change and Climate Policy" published in the January issue of Nature Climate Change journal, the researchers from the United States, Scotland, Austria and Australia say that methane and nitrous oxide gases trap, pound-for-pound, more heat than CO2.

The greatest source of methane, they note, is livestock. And not just any farm animals, but cows.

Stomachs matter: Not to get too deep into animal anatomy, but the paper's authors note that pigs and poultry have a single-chambered stomach to digest food and their methane emissions are negligible.

But ruminants such as cows have multi-chambered stomachs and their digestive process essentially ferments the vegetation they consume.

The end result, according to the researchers, is that methane is produced as a by-product.

Worldwide, they note, livestock account for more than 14 percent of anthropogenic (caused or produced by humans; yeah, I had to look it up) methane production.

And ruminants, essentially those herds of cows we keep in pastures across the world, are the largest single methane source.

Time for a meat tax? Since most of us aren't willing to give up our milk or steaks (hey, I'm a Texan; it's required we eat beef!), the logical alternative is, of course, taxation.

"Implementing a tax or emission trading scheme on livestock's greenhouse gas emissions could be an economically sound policy that would modify consumer prices and affect consumption patterns," say the greenhouse gas researchers.

Such a tax, according to the paper, has been successfully designed for the European Union with tax rates proportional to the average greenhouse gas emissions per unit of food sold. However, note the paper's authors, issues such as social justice, equity and food access also need to be considered within any ruminant tax proposal.

A global warming tax is not a new idea. But getting so specific as to call all the cows home so they can be added to the list of taxes created to change our personal behavior is a new wrinkle that is getting some attention.

And yes, as my headline already indicated, I am going there.

We might be able to reduce such dramatic climate change effects by instituting a flatulence tax on cattle.

Congressional climate change hearing: Talk about timing. As another brutal winter storm was battering the Southeast on Wednesday, Feb. 12, and about to head up the East Coast, the Senate Committee on Homeland Security and Governmental Affairs held a hearing to discuss how to better prepare the nation for extreme weather events.

"Events like Superstorm Sandy, recent wildfires, dangerous tornadoes and historic droughts may well be just the tip of the iceberg of what's to come," said Carper. "And even today, the East Coast is preparing for yet another snow storm while the West Coast is experiencing a historic drought and increased fire danger with no end in sight."

Carper, who scheduled the hearing before this week's winter storm was forecast, noted that it was not designed to "hash out climate science," but rather to find common ground on the cost, both economic and in lives impacted, of being ill-prepared for extreme weather.

David Heyman, Department of Homeland Security assistant secretary for policy, told the Senators that failing to prepare for extreme weather events has cost the United States $1.15 trillion in economic losses from 1980 to 2010 and the bills might get bigger.

"According to the U.S. Global Change Research Program, future impacts of climate change project national economic losses on the order of $1.2 trillion through 2050," said Heyman.

Still chilly in D.C.: You'd think with members of Congress constantly fretting (and demagoguing) about government costs, those figures would be big enough to get them to at least sit down and discuss climate change and ways to deal with it.

But until there is a change in the political climate, both on Capitol Hill and across the United States, don't expect much actual action on ways to combat or cope with climate change.

Since the planet hasn't warmed for the last 15 years, global warming is now conveniently called climate change. Now government scientists can blame it for anything that happens. A hard winter is not a result of global warming. It's only a sign of winter.

We have always had hurricanes, bad winters, and hot summers. How about they stop using "climate change" as another reason to get into our pockets and look at maybe cutting our massively out of control spending.