Sure it's a rerun, but it's still the feel-good story of the 2014 Winter Olympics at Sochi.

Alexandre Bilodeau, the Canadian moguls skier, won his first Olympic gold medal in 2010 at home when Vancouver, B.C., hosted the games. His emotional celebration with his older brother Frederic, who has cerebral palsy, has made both brothers national sensations. 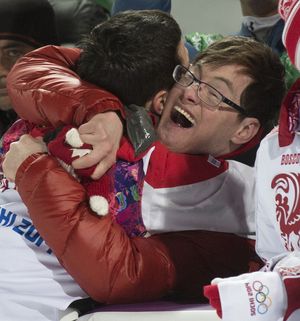 Now he's hanging up his skis to complete his accounting degree studies at the John Molson School of Business at Concordia University in Montreal, Quebec.

That's right, folks. That champion skier with the disarming personality is a numbers cruncher in training.

In fact, following his Vancouver triumph as the first Canadian to win Olympics gold in his home country, Bilodeau took a year off from World Cup competition to concentrate on his accounting degree.

Bilodeau's financial inclination also was evident thanks to one of his sponsors. The 26-year-old skiing accountant-to-be has a sponsorship deal with accounting giant KPMG, where his father is a tax partner in the company's Montreal office.

Bilodeau even made a video in 2011 for prospective KPMG employees.

His advice: "Believe in you and stay yourself."

That seems to have worked out pretty well for Bilodeau so far. I suspect while he might not get medals for his future accounting work, Bilodeau will continue to be a winner.