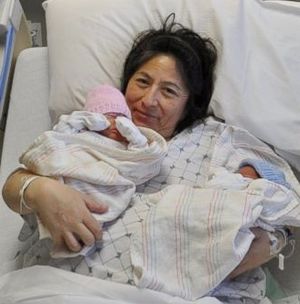 Lorraine Yaleni Begazo and her younger brother Brandon Ferdinando Begazo have no idea of the tax benefits they've provided their parents.

The twins just want their next meal and clean diapers. That's to be expected, they're just a few days old.

But because they were born in two different years, the New Year's Eve/New Year's Day babies give their mom and dad an immediate tax benefit when the folks file their 2013 tax return. Then they get double the benefits with their 2014 filing next year.

And the tax timely deliveries at MedStar Washington Hospital Center in Washington, D.C., weren't the only split-year deliveries that occurred while millions of other folks were clicking champagne glasses for different reasons.

Early, but happy arrival: Tohalino and her husband Warren Begazo had expected the children to arrive later this month, but both babies (and mother) are doing well despite the premature delivery.

Borgazo told the Washington Post that the prospect of twins initially left him "in shock and happily anxious. I worried about the responsibility for two at once, their college funds."

Now, however, he's just enjoying his new, larger family. Plus, said Borgazo, Lorraine and Brandon will give Dylan, Borgazo's son from a previous marriage, "a chance to be called brother and he won't be alone at home anymore."

Automatic tax exemption: It also looks like Borgazo also has been doing his tax homework. He told the newspaper that "Lorraine is the deduction for 2013. I got one in the bank with Brandon."

Technically, the twins are exemptions, but I'll cut the excited father some tax slack.

Borgazo is correct, however, that babies born on Dec. 31 pay off at tax time.

By arriving before the clock strikes midnight, the child provides parents a full year of tax bonuses without having had to deal with any 3 a.m. feedings or mounds of dirty diapers.

The tax law says that parents get to claim child-related tax breaks for the year of a child's birth no matter how early or late in the year that date falls. So Dec. 31 means for all the previous 364 days, too. The rule also applies to adoptions.

That's just one of the many ways that a bundle of joy, year-end arrival or otherwise, can help reduce parents' tax bills.

The tax joys of parenthood are outlined in this week's Weekly Tax Tip.

This is the last weekly tip for a while. But don't despair tip aficionados! With the impending arrival of the 2014 tax-filing season on Jan. 31, the Daily Tax Tip series will start on Monday, Jan. 6.

Our boy-girl twins were born on 27 December, in Korea. Unfortunately they did not join us until the following March.

However our niece just gave birth to her 2nd daughter at 11 PM, this New Year's Eve, so you can't get much closer than that to maximizing the tax benefits of a new child!