Colorado tax collectors appear to be the big winners in the state's sale of recreational marijuana.

Owners of the 37 new dispensaries around the state reported first week retail sales exceeding $5 million. Around $1 million in legal pot transactions were made on New Year's Day, when the new law took effect. 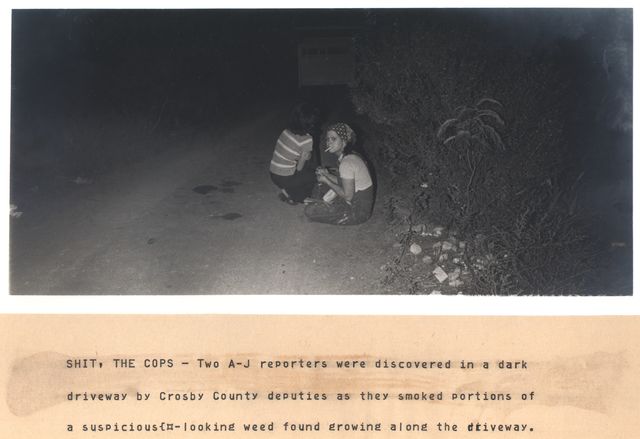 Despite the smart-ass caption by the Lubbock Avalanche-Journal photographer (was that you, Milton Adams?), I was lighting up a Marlboro cigarette, not the wacky weed back in my early days as a newspaper police beat reporter called in late one night to cover a breaking story.

But the biggest smiles are likely on the state, county and city tax collectors' faces.

Voters approved two pot taxes last November. A 15 percent levy on wholesale transactions will go toward school construction. Another 10 percent tax on retail sales will help pay for regulation of the pot industry.

Local pot taxes also will vary in each Colorado jurisdiction. Levies on the product in the Denver area, for example, will be about 30 percent to 35 percent.

The combined annual tax take is expected to be close to $70 million.

The official word on sales and tax figures will come next month. Colorado businesses must file January tax reports by Feb. 20.

Law enforcement and the court system will no longer be spending resources -- and cash -- to arrest, try and imprison small-time marijuana buyers and sellers.

Watching the initial sales and tax figures along with Colorado officials are folks in Washington. That Pacific Northwest state also legalized recreational marijuana sales last year, but pot commerce doesn't commence in the Evergreen State for a few more months.

Pot in Washington will face an excise tax of about 44 percent. But that might not necessarily mean much more money for the state.

"We have to emphatically temper expectations of tax revenues," Reuven Carlyle, Democratic chairman of the Finance Committee in the state House of Representatives told Bloomberg columnist Joni Balter. "This is completely art, not science."

Still, you can't blame lawmakers for being in high spirits after catching a whiff of possible new tax collections.

Some Alaska lawmakers are probably pretty happy that the Campaign to Regulate Marijuana submitted more than 45,000 signatures this week to state election officials. If 30,000 of those John Hancocks are verified, a legalize pot ballot measure could be before Alaska voters this August.