Well, that tax audit didn't go as the Internal Revenue Service had planned. 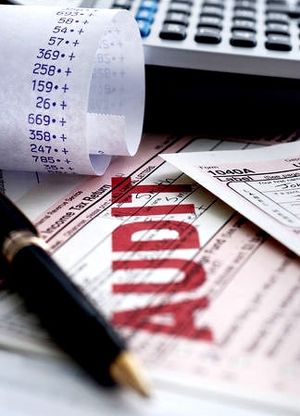 William Berroyer was in the IRS' Hauppauge, Long Island, office in 2008 working out a deal on $60,000 in taxes the agency said he owed.

The six-figure addition to Berroyer's bank account is from a physical injury that Berroyer sustained during the return examination.

In a suit filed in federal court, Berroyer said during that fateful audit he tripped over a phone cord and fell against a filing cabinet. Although he left the IRS office under his own power, Berroyer said he had lost feeling in a leg by the time he got to the parking lot.

The Nesconset man spent 17 days in hospitals and rehab centers to treat his leg and also shoulder pain.

He also filed a federal lawsuit against the IRS which was finally resolved this week.

The New York Post reports that during the trial, Berroyer testified that his injuries prevented enjoyment of activities ranging from golf to intimacy with his wife.

The IRS acknowledged that Berroyer tripped on the phone cord, but countered that he was exaggerating his injuries.

Berroyer had sought $10 million from Uncle Sam, claiming that he had been confined to a wheelchair since the injury.

At least it's not taxable.

Taxation of court awards: America is an extremely litigious society. But many plaintiffs often discover that in addition to having to pay their attorneys, they also owe the Internal Revenue Services.

So just when are legal awards taxable?

The Internal Revenue Code (26 U.S.C. § 104(a)) says that the only tax-free damages are those that compensate you for physical injury or physical sickness. That's the section that covered Berroyer.

But if the emotional distress did not originate from a personal physical injury or sickness, you must include any award for the pain in your income.

You also must take into account any deductions you might have previously in connection with the injury being adjudicated. If, for example, you deducted your medical expenses, then you must include in your income the settlement portion that is for medical expenses you deducted in any prior tax year.

Then there are punitive damages. As the name indicates, it's a way to whack a defendant's bank account for his or her bad deeds. Punitive damages generally are taxable, too, even if they are handed out in connection with a physical injury or sickness case.

The IRS elaborates on these and other legal settlement tax situations in Publication 4345.

But you might want to think about hiring a tax lawyer or other tax professional in addition to your civil case attorney.

The biggest heartbreak for many recipients of lawsuit awards is the discovery that the entire amount of proceeds is taxable -- before subtracting attorney fees. Under some circumstances, however, they might be able to claim a tax deduction for their legal costs. As you wisely recommend, litigants should consult their tax advisers before spending too much of the money awarded from a lawsuit.