Don't miss out on the tax deduction for charitable donations

Last year was tough for lots of folks. The good news is that people were more generous than ever.

In 2013, Americans donated more than $416 billion, an almost 13 percent increase over the prior year, according to the Atlas of Giving.

Were you part of the reason that charitable giving increased last year? If so, thanks!

Now don't miss out on a possible tax deduction for your good deeds.

Increasing goodwill: Last year was the third straight year of philanthropic growth since 2009's low point of $316.5 billion, according to the Atlas of Giving's latest report.

The uptick in giving came as the country was just crawling out of recession. The economic tie is significant. The Atlas analyzes charitable giving with an eye on specific economic, demographic and event factors.

"In 2013, we experienced a fantastic, record-setting year for charitable giving in the United States," said Rob Mitchell, CEO of the Atlas of Giving. "Stock market growth fueled much of the giving, but improving employment, growing real estate values, a lack of inflation, low interest rates, and acceleration in GDP also helped to make 2013 an especially strong giving year."

Recipient sectors: So where did the money go?

Religion related gifts remain popular. Donations to churches and religious causes last year rose 8.6 percent to $143.4 billion, up from $131.8 billion in 2012. That makes this the country's largest giving sector. 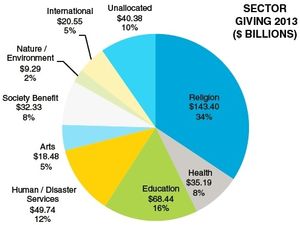 However, religious gifts as a share of all giving fell to 34 percent last year from 36 percent in 2012 and 37 percent in 2010. This trend, says the Atlas of Giving, is due to several years of high unemployment combined with decreasing church membership and attendance.

Human needs and disaster services is the third biggest and fastest growing category, with 12 percent of charitable gifts in 2013 going to groups in this category.

The amount donated to help others struggling to recover from various travails was up 18.7 percent in 2013 from 2012, reaching $49.7 billion compared to $41.8 billion the prior year.

Donor groups: And who gave?

Corporate philanthropy accounted for $20.2 billion, or almost 5 percent, of donations last year. That was the same percentage as 2012's business giving, but the 2013 amount topped 2012's $18.4 billion.

Charitable giving and tax deductions: Many of the folks who made charitable donations last year also were able to claim a tax deduction for their gifts.

Your gift must go to a qualified charity. This is one that meets Internal Revenue Service requirements to operate as a tax-exempt organization.

Reputable groups will provide you with information on how they meet the tax code rules. You also can check out charities by using the IRS' online search feature, as well as GuideStar and Charity Navigator data.

You must itemize. Although most taxpayers don't file Schedule A, that form is the only way for a generous soul to get a tax benefit.

For most of us, there's no practical limit on our annual giving. Sure, the tax law for public charities -- churches, religious organizations, hospitals, educational organizations and the like that receive 501(c)(3) status from the IRS -- says you can't give more than 50 percent of your annual income, but in reality that's a target most of us won't hit, much less come near.

Be careful, though, if you make a lot of money. If your adjusted gross income is $150,000 or more as a married taxpayer, $250,000 as a single taxpayer or $300,000 as a married couple filing jointly, all your itemized deductions, including your charitable gifts, will be reduced a bit.

Properly value noncash donations. If instead of writing a check or donating via credit card, you can also give property to charity. Here you claim the fair-market value -- that's what a willing buyer would pay a willing seller -- of the items and count that as your donation amount.

Just be sure that the household items or clothing you give away are in good or better shape. That's the law and it's also really tacky to give away ratty stuff to a charitable organization.

Regardless of whether your donation is cash or property, get a receipt. The IRS is serious about documentation for everything, and charitable giving is no exception. In fact, there are specific rules about just when a formal acknowledgement from the donation recipient is required.

But even if the nonprofit doesn't have to, by law, give you a receipt, ask for one anyway. You don't have to include with your charity deduction claim, but if the IRS ever questions your filing, it could disallow the item if you don't have proof you gave.

Volunteering doesn't count: One area of charitable giving, however, doesn't give you a direct tax break.

As I noted last week at my other tax blog, you can’t deduct the time you spend volunteering. But there are other tax benefits for giving of your time.

Also over at Bankrate Taxes Blog last week, I looked at who's off the tax paying hook this filing season.

I usually post my additional tax thoughts over at that personal financial website tax blog on Tuesdays and Thursdays. If you happen to miss them then and there, you can always find a synopsis here on the ol' blog the following weekend.

Great advice. definitely saving for when i start my own little business down the road. Thanks!