How many of your holiday gifts, either given or received, were purchased online? Probably at least a few.

Black Friday online shopping passed the $1 billion mark for the first time in 2013. The $1.2 billion take by Internet retailers was up a hefty 15 percent over the previous year. That's very close to overall e-commerce sales estimates, which predict slightly slowing percentage growth, but increased dollars spent, in this sector.

That trend is why states are cutting deals with Amazon to get the online retail giant to build structures in within their borders.

The latest real estate/tax break blockbuster came last fall when Wisconsin agreed to provide Amazon $7 million in state tax credits to get the company to build a 1-million-square-foot distribution facility in Kenosha.

When California began collecting sales taxes on Internet transaction back on Sept. 15 2012, it raked in $96.4 million in those first three and half months.

Distribution centers and warehouses create the undeniable physical nexus cited in the 1992 U.S. Supreme Court Quill v. North Dakota decision that allows collection of taxes on remote sales. Back then it was primarily mail order catalogs.

And with the arrival of 2014, Amazon now collects sales taxes in 19 states. That means that the majority of U.S. consumers now pay sales tax on their Amazon purchases.

As I noted over at Bankrate Taxes Blog, on Jan. 1 Amazon began collecting sales taxes on shipments to Indiana, Nevada and Tennessee.

More Amazon taxes in 2016 ... or sooner: The next scheduled Amazon tax collection isn't until 2016, when the company will start collecting from South Carolina online shoppers.

However, if the Marketplace Fairness Act clears Congress in 2014, sales tax collection on all online purchases would be the law for shoppers nationwide.

We'll be keeping an eye on that bill, which breezed through the Senate, and is finally getting some attention from the House Judiciary Committee.

Illinois tax transparency: While Amazon taxes were kicking in for residents of three states, folks in Illinois were getting a better look at how their state spends the takes it collects.

As I noted last week at my other tax blog, Illinois Comptroller Judy Baar Topinka will be sending residents who receive state tax refund checks information on state spending/

The snail-mailed envelopes also will contain a flier about the state's unpaid bill backlog and other tools to help Illinois taxpayers follow the money.

In case you get your Illinois refund electronically or don't get one, below is a preview of the flier. 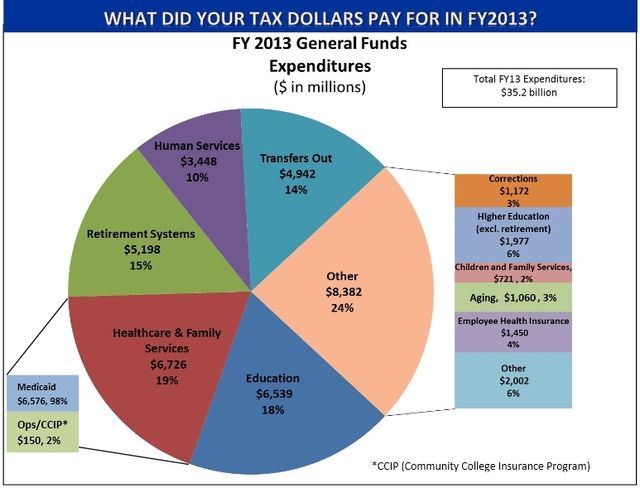 If you miss my additional tax thoughts over at that personal financial website tax blog, usually on Tuesdays and Thursdays, you can always find a synopsis here on the ol' blog the following weekend.