Timing is everything, especially when it comes to taxes.

That was made clear yesterday when we finally got official word about the start of the 2014 filing season at the same time that questions were raised by a government oversight office about the Internal Revenue Service's ability to deal with taxpayer filing problems.

We have a start date! Let's start with the relatively good news.

For us taxpayers, the timing of the filing of our 2013 returns will be later than usual. But it won't be as late as it might have been.

The IRS announced Dec. 18 that the 2014 tax filing season will begin on Jan. 31. That's 10 days later than the agency had planned to open its doors, but it's not as late as it might have been.

Shortly after the IRS was back at full staffing in the wake of October's 16-day federal government closure, tax officials noted that the shutdown was going to delay the start of the filing season. Back then, the IRS warned that the first day it would accept returns might even be pushed into February.

But the agency got all its computer system updates installed and tested in time to delay the official filing season until "just" the last day of next January.

Same slow song, 2014 verse: While the late starting date will delay the processing and delivery of tax refunds, it's a schedule that, unfortunately, we're used to by now.

The 2013 filing season didn't start until Jan. 30, again because of Congressional action. Or really inaction in taking so long to agree to the fiscal cliff bill, officially known as the American Taxpayer Relief Act, that included tax law changes that necessitated the filing delay this year.

Late starts of filing seasons, at least for some taxpayers, also were the rule in 2011. Similar situations showed up in the 2007 and 2008 filing seasons.

IRS issues with taxpayer queries: Meanwhile, while the IRS was giving us taxpayers a bit of good news, the agency itself was getting some bad news about its taxpayer service. 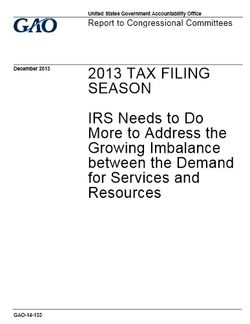 The U.S. Government Accountability Office (GAO) has an unwelcome analysis of IRS' inability to keep up with taxpayer demand for telephone and correspondence services.

In its 37-page report "IRS Needs to Do More to Address the Growing Imbalance between the Demand for Services and Resources," also issued Dec. 18, the GAO says IRS responses in 2013 to taxpayer pleas for help at best held steady or dropped slightly.

"Despite efficiency gains from processing more tax returns electronically, adding website services, and shifting resources from enforcement, the Internal Revenue Service (IRS) was unable to keep up with demand for telephone and correspondence services," according to the GAO report.

The GAO noted that the IRS made changes during the 2013 filing season after getting a similar assessment in 2012. A year ago, the GAO reported that the IRS needed to undertake a dramatic revision of its taxpayer service strategy in order to "better balance demand for services with available resources."

But that's not easy. To cut the IRS some slack, it's still facing budget issues, both from sequester and basic Congressional appropriations.

And, as noted earlier in this post, both the 2013 and 2014 filing seasons have encountered obstacles, again from Capitol Hill, in getting ready to meet taxpayers' annual filing needs.

IRS obstacles, operational and political: GAO acknowledged such issues, noting that any changes in the IRS filing season system "may require ... difficult tradeoffs, such as limiting some services."

In that regard, GAO says, the IRS has proposed eliminating or reducing some 2014 services, such as answering basic tax law questions only during the filing season. However, the GAO reports that IRS officials say the proposed cuts may not be sufficient to stop the deterioration in services.

"Until IRS develops a strategy, it risks not communicating expectations about the level of services it can provide based on the resources available," says the GAO. "IRS could use the strategy to facilitate a discussion with Congress and other stakeholders about the appropriate mix of service, level of performance, and resources."

Maybe John Koskinen, once he's finally confirmed as new IRS commissioner by the Senate, will be able to change things. But right now, too many lawmakers view the IRS as an easy target, an already hated symbol of anti-government sentiment to be exploited for campaign purposes.

Given that attitude, I suspect we'll be seeing basically the same GAO report on IRS filing season services this time next year.