Did you pay your real estate taxes this month so you can deduct the payment on your 2013 taxes?

How close to your residence's value was the assessment on which your tax bill was based?

Ours was pretty close. But then the housing market in Texas, and the part of the state where we live in particular, hasn't been hit as hard as other parts of the country.

There's a tiny bit of improvement in national numbers. Online real estate database Zillow says that in the third of 2013, negative equity for homeowners with mortgages has fallen to 28.2 percent from 30.9 percent in the second quarter.

That's good news, meaning that fewer homeowners are underwater on their mortgages.

Zillow created an interactive map, using third quarter 2013 data, where you can find out what percentage of homes in your county or ZIP code are in negative equity. 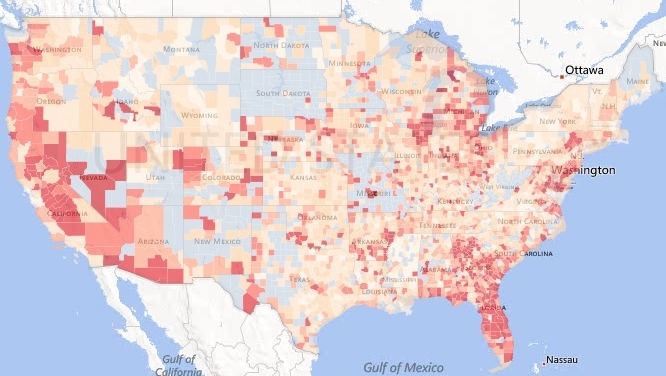 Click on image to find out how many of your neighbors are underwater.

But even though the trend seems to be improving, 30 percent (give or take a few percentage points) of homeowners owing more on their homes than they're worth is not good.

Taxes on top of lost value: And things could get even worse for some struggling homeowners next year who modify their mortgages, dispose of their property through a short sale or, in the worst case scenario, face foreclosure.

In those instances, the homeowners could see a portion of their debt written off by the lender. From a basic bottom line perspective, that's good. They no longer owe the money to the bank.

But from a tax view, it could be costly.

In most cases where a lender forgives debt, the debtor owes tax on the amount of canceled debt. Since 2007, however, homeowners have gotten special treatment.

Since 2007, the Mortgage Debt Relief Act has exempted in some cases home-related forgiven debt from federal taxation. The law has been extended through 2013.

To continue, Congress must reauthorize it. The mortgage relief rule is part of more than 50 expiring tax provisions known collectively as extenders. These technically temporary tax laws are renewed, or extended (hence the name), every few years.

Some legislative support: Real estate industry lobbyists naturally are calling on Congress to extend the Mortgage Debt Relief Act at least through 2014.

H.R. 2994 in particular has broad bipartisan support, with 29 Democrats and 23 Republicans signed on as cosponsors seeking to extend the tax relief through 2014. The other two bills want the tax break to continue for two more years, until the end of 2015.

A group of Maryland Representatives and the Old Line State's governor also have sent a letter urging Congress to pass mortgage debt forgiveness legislation as soon as possible.

State legal officers get in on the act: And now the attorneys general of 41 states also are adding their voices to the plea for continuation of the mortgage debt tax forgiveness.

As I noted last week at my other tax blog, the top legal officers in most states wrote to Congressional leaders in support of the tax-free cancelation of debt for struggling homeowners.

Will the expanding pool of support for continued mortgage debt tax relief be enough? It's unclear, both whether Congress will act on this particular provision separately when it returns next month, or whether it will approve the full package of extenders early in 2014.

Speaking of early in 2014, that phrase doesn't apply to the coming tax-filing season. The IRS has announced that it won't start processing tax returns until Jan. 31, 2014.

When it does, the tax agency also has alerted taxpayers not to expect much in the way of personal tax-filing help from Uncle Sam.

I looked at the Internal Revenue Service's plan to increase automation when it comes to taxpayer interaction next filing season in my second posting last week over at the Bankrate Taxes Blog.

If you miss my additional tax thoughts, usually on Tuesdays and Thursdays at that personal finance website, you can always find a synopsis here on the ol' blog the following weekend.