Cold enough for you? The answer from residents in much of the United States is an emphatic yes.

Here in Austin, we're dealing with below freezing temps. Our backyard waterfall is showing some of the icy effects. 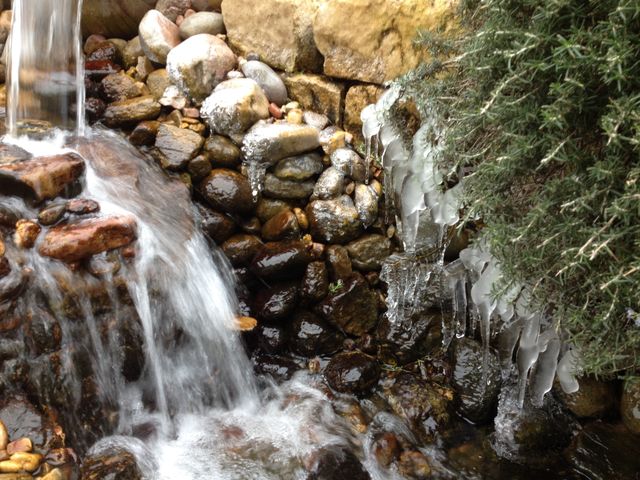 But we're downright balmy compared to some spots across Texas and the rest of the country being hit by this frigid blast.

Some folks are dealing with no heat since they've lost power. Others have heat, but the furnace isn't working very well.

Or their homes are letting warmth escape through old leaky doors and windows. Or their walls simply don't have enough insulation.

Bundle up or upgrade: The best advice I can give folks without electricity is blankets, fireplaces and hot chocolate.

But for the rest of you, think about making some improvements to your cold abode. It might even save you some tax dollars.

As long as you get the work done by Dec. 31, your end-of-year approved energy upgrades to your primary residence could get you a tax credit of up to $500 on your 2013 return.

Qualifying improvements include the aforementioned insulation, energy-efficient exterior windows and doors and heating systems. Energy Star has details on the specific tax credit requirements and limits, such as a maximum $200 for new warmer windows, as well as other upgrades that could qualify for tax relief.

Lifetime credit complication: In addition to deciphering how much each upgrade is worth, you also must make sure you haven't already hit the lifetime maximum credit claim.

Some type of energy-efficient home improvement tax credit has been around for years. This latest iteration takes those other credits into account.

The possible $500 tax credit is for folks who haven't ever claimed any similar tax credit in prior tax years. When you figure your 2013 credit, Form 5695 asks about your earlier claims. It even offers a worksheet for you to add up previous credit amounts that you must enter on line 18: 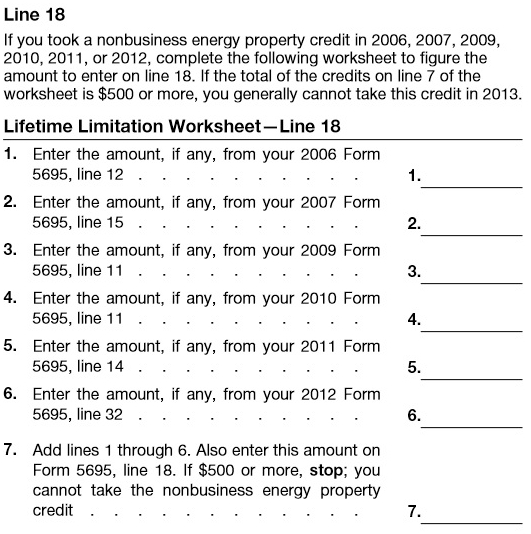 Still, $250 is not too shabby, especially since it's a tax credit. That means it reduces the tax you owe dollar for dollar.

Time running out: I know that I blog about this tax credit every time the temperatures get extreme.

There are two reasons for my fixation on it.

Second, this could be the last time you get a chance to take this particular residential energy credit. It, along with more than 50 other tax breaks known as extenders, are going to cease to exist when 2014 rolls around.

I expect most of the expiring tax breaks to be renewed retroactively sometime in 2014. That's the slipshod way that Congress has been doing the little business it does conduct for the last few years.

But I'm not so confident that this tax credit will make the cut.

Representatives and Senators are looking for more money without raising taxes. One way to do that is to simply not renew a tax break that ended.

The anti-tax faction will argue that letting a tax break expire is technically a tax increase. But it's still easier to back-door the revenue this way and then counter that budget needs call for tough choices.

And this particular tax credit already expired at the end of 2007. It wasn't available in 2008 and was reinstated, in an improved $3,000 version, as part of the 2009 stimulus bill before being pared back to its current $500 form.

So there's precedent for its elimination.

That's why I harp on remind y'all about this tax credit. And here is my final three-part piece of advice about it:

You'll be more comfortable for the rest of the winter. And you could pay Uncle Sam less when you file your 2013 return.

Coping with the cold: While many of us are whining about the weather, some more rightfully so than others, a few folks are handling the cold snap just fine.

Football fans are bundling up and filling stadiums to support their favorite teams this weekend.

And one professional golfer whiled away the time he spent stuck in an icy traffic jam in
West Texas practicing his swing.

I guess the tax break for energy improvements is one of the “benefits” I receive from the government since calculating the tax credit generally requires assistance from a paid professional like me. However, the random event of early winter weather here in Austin is certainly a contributing factor. Nevertheless, I’m not confident that a social advantage is realized from tax rules that are as capricious as central Texas weather.