Super Typhoon Haiyan (also known as Yolanda) slammed into the Philippines this morning.

It is too soon to know the full extent of the damage, but given the strength of the storm -- it was a Category 5 as it neared the island nation -- things are likely to be dire. 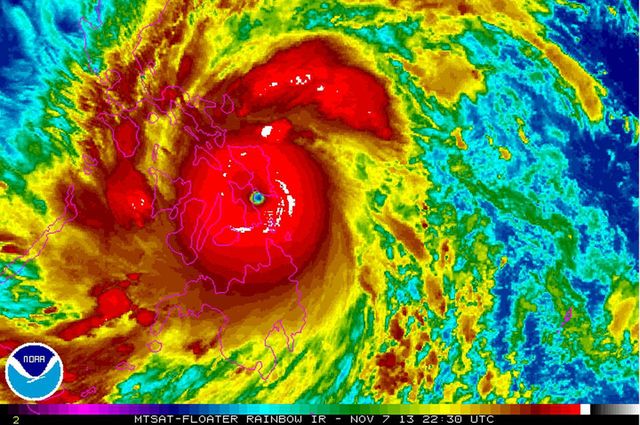 One report is that at least 33 people have died in the storm, which meteorologists say is possibly the strongest storm of its kind in history. Reuters reports that 12 million people, more than 10 percent of the country's population, were potentially in the Haiyan's path.

UPDATE, Saturday, Nov. 9, 2013, 1 p.m. CT: Based on field reports from relief workers, the Philippines Red Cross says that up to 1,200 people are feared dead. They typhoon now is headed toward Vietnam.

UPDATE, Saturday, Nov. 9, 2013, 10:15 p.m. CT: The death toll could be as high as 10,000 people, according to government officials. This new number is based on reports from village officials in areas slammed by Typhoon Haiyan.

I know that if you do donate, you are doing so because you want to help. But if you itemize, you might also be able to claim your typhoon-related gift as a charitable deduction.

Give to U.S. groups: The tax key to those tsunami donations then and typhoon charitable gifts now is that they be made to U.S.-based nonprofit organizations.

Contributions by individuals to a charity created or organized under foreign law are not deductible for U.S. income tax purposes.

The bottom tax line is that if you want to make contributions to benefit a particular foreign charitable cause, you should donate to a U.S. "friend of" the international organization that is offering disaster relief. Such U.S. charities are often established, says PwC, solely to raise money domestically to be distributed to foreign charities.

You also can give to U.S.-based, IRS-qualified organizations, such as the American Red Cross, which has international counterparts that provide help to disaster victims globally.

Other donation rules apply, too: In addition to giving to a charity that meets IRS nonprofit tax standards -- you can use the agency's online search tool to check, as well as those from private philanthropy trackers GuideStar and Charity Navigator -- you also must make sure that you follow the other charitable contribution rules if you want a tax deduction.

First, as I mentioned earlier, charitable donations are deductible only if you itemize. That means filling out Schedule A and sending it with long Form 1040 instead of claiming a standard deduction.

Most folks, however, don't itemize. They find the standard deduction amounts are more than their total of claims on Schedule A.

If that's your situation and your still donate, good for you. If you do itemize, though, then you have some more tax deduction considerations.

Be sure to get a receipt. You generally do not have to send in the gift verification, but if the IRS questions your deduction, it can disallow your deduction if you don't have the proper donation documentation.

And be sure that you meet the donation deadline. Unless special exceptions are made as they were in 2005 for the Indian tsunami in late 2004 and again in 2010 for the Haiti earthquake in January of that year, you must make your gift by the end of the tax year.

Giving a whole, whole lot: Extreme generosity is welcomed, but it does pose a few more tax issues.

In most cases, public charities -- those groups you see touting their IRS 501(c)(3) status in their donation requests -- are known as 50 percent charities. They include churches, religious organizations, hospitals, educational organizations, private operating foundations or other organizations that receive a substantial portion of their support from the public or the government.

And the percentage designation means that a donor's deduction is limited to 50 percent of his or her adjusted gross income (AGI).

So if you give $10,000 to your university's foundation to endow a scholarship, you can claim that full amount as a tax deduction as long as your AGI is more than $19,999.

Realistically, few folks will donate more than half of their annual income to any charitable organization. But just in case you come into a lot of extra cash you want to share, I thought you should know.

And if you do ever happen to give more than is allowed, you will get your tax break, but not on one tax return. You can carry the excess donation amount into up to five years future tax filings.

If you give physical items, such as clothing or household goods, they must be in good or better shape. Remember, people are going to get these as donations or buy them from the nonprofits' thrift stores; they don't want crap that you should have just thrown out.

As for your deduction amount, you count the goods' fair market value. That's the price you'd be willing to pay if you were the one perusing the thrift store racks.

Is your IRS tax deduction all that you really care about? Really? Stand behind the lawyers on judgement day please(over there->)